New York pizza purveyor Two Boots is now open in Echo Park next to the Echo. Reservation for Three has some early thoughts. They plan to be open until 2 am on weekends. 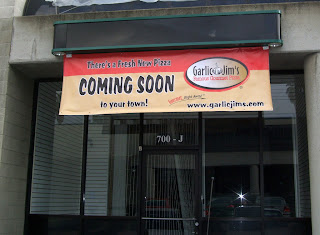 Like Silver Lake and Los Feliz, South Pasadena is over-pizza-ed and under-everything elsed. Coming soon to add to Nonna's, Mamma's, Carmine's, Little Parlor, Round Table, Papa Johns, etc. is something called Garlic Jim's. Apparently it's a franchise that also has locations in Pasadena and Burbank, with some offering gluten-free pizza as well. It will be across the parking lot from Bristol Farms. Anyone tried it?

And before we leave the Pasadena area, Dots Cupcakes had a line down the street for its opening this past weekend in Old Town. This store should draw more traffic than their sort of obscure Arroyo Blvd. location, and their cupcakes are quite nice, but still...cupcake stores are still opening? 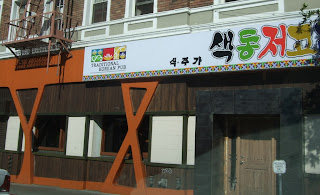 This spot on Third St. near Normandie (right) used to be a pretty low-key dive bar, with super cheap drinks and old men staring into their beer while bad music played on the jukebox (don't ask me how I know that.) Now it's going to be a Traditional Korean pub.

The Olive is now open on Hillhurst in Los Feliz. With Cafe Bravo (hopefully) opening soon, this marks a good year for Middle Eastern Food in the hood. Here's some details from FoodGPS.
at 8:59 AM

I had no idea that Dots opened another location -- so odd that it's so close to the first one.

I think Garlic Jim's is decent but nothing special. Is it better than Dominos, Pizza Hut and Papa Johns? Yes, for sure. But it can't hold a candle to Mamma's Brick Oven. Moving in a hundred feet from them is a strange move.

The Olive is terrible. I wish it was better since the people seem nice. It's just not.

That's so funny. I drove by that Korean pub as they were installing those funky X's on the exterior. Wonder what the "traditional" entails...

If you'd like to try Garlic Jim's Pizza, I'll send you a gift certificate good at any of our locations.

Of course, I think it's the best. My favorites are Smokin' Sweet BBQ Chicken, Nutty Chipotle (cashews on pizza. Yum!) and our Pepperoni (with specially formulated pepperoni that's a little on the spicy side).

Send me your address and I'll drop the certificate in the mail.

I was excited about Garlic Jim's because of the interesting ingredients they offer. Unfortunately I find their stuff a little too salty and rich. Hand tossed crust is doughy. YMMV.