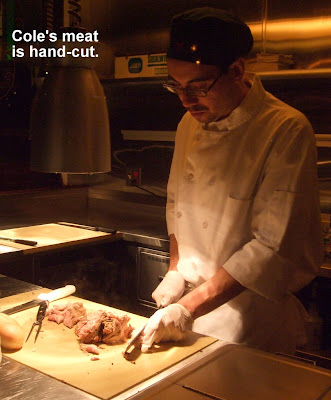 I'm glad I got to see the old Cole's French Dip before it was re-done by Downtown nightlife impresario Cedd Moses with a menu update from Grace's Neal Fraser. Two years ago, it looked every bit of its 100 years old, in a cool but dusty way. But Moses was sensitive to fears that he would ruin the whole vibe, and wisely left the front room pretty much the same while subtly spiffing up the bar area. The main difference is that there's no more musty, kitschy back room -- it's now a swank separate bar, The Association, but more on that later. The menu is even simpler than Philippe's, which also claims to be the originator of the French dip. There's beef, pork, lamb and turkey sandwiches for $8; cheese toppings for $1 more, a few sides, and grilled cheese sandwiches for the meat-intolerant. A few German beers on tap are $6 and $7 a glass, and classic cocktails are $10 each. Matt tried the lamb with blue cheese, which is invariably touted as the thing to get at either Philippe's or Cole's, while I had a more purist pork with their spicy horseradish-intensive housemade mustard. 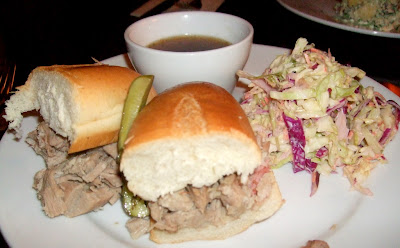 What can I say? It's an American meat sandwich -- the meat is top quality, hand-sliced, no fat or gristle, but it's just -- plain, no matter how much mustard you slather on and amount of au jus you dip it in. Maybe it was too close to my revelatory trip to Cook's Tortas, but it's hard for me to get very excited about a pile of plain meat on a bun. The coleslaw side was a healthy portion but could use a bit more zing. Matt is more of an American food fan than I am -- he loved his lamb and blue cheese and his bacon potato salad too. I'd go back to Cole's again with my meat-loving son, and I'm glad it wasn't wrecked in the re-do, but I guess I like my sandwiches with more layering of flavors.
After dinner, we checked out The Association next door. It's dark, cavernous and atmospheric with a '70s feel, not to mention a dj spinning the likes of Elton John and Carly Simon. The cocktail list is full of things like lavender liqueur and absinthe; I asked for something citrusy with bourbon, and the bartender mixed me up a sour with hand-squeezed lemon juice; Matt had something like a mojito topped with a splash of champagne. Served in narrow champagne flutes, cocktails weren't huge but at $10, but seemed like a relative bargain for the quality of the mixology and juices. "This seems like it would be a great place to get drunk," Matt said, and I'd have to agree.

I must visit the revamped Cole's soon! It looks great!

Is it significantly more expensive than Philippe's? Sort of sounds like it....

Yea, it looks tasty, but I'm going to have to actually, you know, taste it before deciding if it will move my dip-eating Downtown from Chinatown. I'll be going for the lamb when I do.

As for Philippe's, they've got a huge menu, though I don't know if anyone orders anything from it, including me.

I think that this website is quite interesting, but I do believe it leaves a bit to be desired in the amount of information posted about Downtown dining spots. Did you know that 15 restaurants have opened in Downtown in the past 2 months? With several more to open in the coming weeks, I'd love to see a renewed focus on LA's next big dining scene.
Otherwise, I think the comments are pretty spot on, thus far.

Um, thanks anonymous, I guess. I'm quite aware that some 15 restaurants opened Downtown in the last two months, but I'm just one person, and I eat all over town. However I definitely plan to delve more into Downtown in the coming months. EatingLA tries to concentrate on Silver Lake, Los Feliz, Echo Park, Downtown, Eagle Rock, Highland Park, South Pasadena, Pasadena and the San Gabriel Valley...which is a pretty big area, not to mention frequent field trips to other neighborhoods.

I agree that the Cole's sandwiches are boring. I recently did a side by side with the new Cole's and Philippes and decided I'd stick with Philippes. The sandwiches there just have more character, the lamb is more gamy, the blue cheese stronger.

Did you have the creamed spinach at Cole's? That's the one dish that I thought they did really well...you could see some of that Grace influence there.

I wasn't impressed with Cole's at all. I found it rather disappointing really. The potatoes in the salad weren't even cooked!
I did love the Association though. Try their organic margarita. perfect!

Cole's is more expensive than Philippe's, but the sandwiches are no comparison. Cole's wins easily, and everyone I have taken with me agrees. I wish the sides were a bit cheaper, but they are good. The apple pie is great too, especially with the big scoop of ice cream, but again, not cheap.
And the service is a bit inattentive.
But yet I have been there about 5 times since they opened!

I can't believe Cole's EVER produced a decent sandwich by the crap I was served last week...rivalry with Philippe's? Please, don't make me laugh! Cole's has the distinct honor of serving me the WORST SANDWICH I've ever eaten...and I've eaten a lot of sandwiches (especially french dips). they should be ashamed of themselves!!! I am utterly shocked that Neal Fraser has anything to do with this place....the au jus, cole slaw AND sandwich were terrible!

I can't believe anyone would find the sandwiches at Cole's to be TERRIBLE. I can understand why you wouldn't be bowled over by them. They are quite satisfactory and tasty but certainly not revealtory. Cole slaw and potato salad are also worthy, but again, not head spinning. Prices are higher that Philippe's, but not too much higher. Cole's is okay if you are in the neighborhood. I would say it is only worth a special trip if you want to check out the decor, and if you've never been, say that you've been in the oldest restaurant in the city.

We just went to Cole's this weekend (actual destination was the Association, but wanted to get some food first.) Sandwiches -- pretty good, if not revelatory (husband got the pastrami, though, which he REALLY liked), but garlicky sweet potato fries were pretty excellent and I was VERY impressed by their cocktails. I love a good Manhattan, but I'm terribly picky about how they're made (had to send one back TWICE at Ford's Filling Station), and the menu Manhattan at Cole's was perfect. I'd go back just to drink. And get more fries.