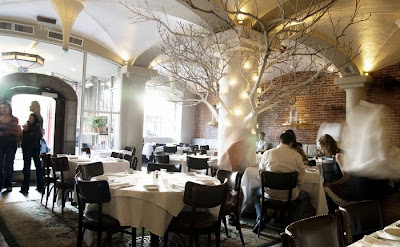 I stopped by Vermont Restaurant & Bar the other night for an upcoming review in the Los Feliz Ledger December issue and to see what executive chef Laurent Quenioux is up to these days. The incredibly innovative former chef of Bistro K in South Pasadena has been doing a series of special dinners at Vermont, but now he's buckling down to get the restaurant firmly established with a classic French bistro menu that adds a few modern Quenioux touches.
November is cassoulet month, and for December, special menus will revolve around blanquette de veau and coq au vin. But not just any coq -- Quenioux, who we spoke to on the phone after doing an anonymous review dinner, says in his charming accent "It will be real chickens, like cockfighting birds." The implication is that these coqs are obtained through some sort of chicken black market, but will be extremely flavorful due to their combative lives. 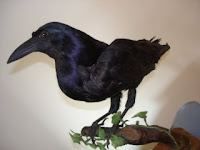 Then, on December 23, if you have any money left after Christmas shopping, you might want to put it towards a white truffle dinner "like the one I did for Jonathan Gold," he says. An eight course truffle dinner will be around $150, depending on the truffle harvest, while the full menu will be about $300. In January, he'll switch to black truffles for another special evening.

For the less wealthy, Vermont now has a $34 prix fixe dinner -- it's a bit confusing when the servers layer the prix fixe menu, the cassoulet menu and the regular menu all on the table, but it's a good value for a first course, entree and dessert. The regular menu is not revolutionary -- no ant eggs or liquorice powder -- but it is a good deal more contemporary than the slightly tired bbq ribs and clam linguini on the previous menu, with creative touches and solid preparation of dishes like short ribs with quinoa and merguez and pork in a cocoa-honey sauce. The room has gained some slightly odd stuffed crows perched on white-painted branches, but it's still one of the more grown-up, comfortable and civilized restaurants in the area. And with Quenioux still tweaking the menu -- a new winter menu bows next week -- Vermont could be upgraded from neighborhood fallback spot to a must-try.

As for the space under construction in back, Quenioux tells us the owners are planning a loungey indoor/outdoor space with simple but fun bar foods like snail pizza.
Quenioux's own planned restaurant Downtown, Bistro 1100, is still planned for sometime next year, but the financing crisis seems to have slowed things down somewhat, so for now, catch him at Vermont.
at 5:48 PM

Going Saturday night for cassoulet. It better be good. One of my favorite entrees from any cuisine.

I love that Chef Quenioux is focusing on solid french classics. I'm going to try and hit up Vermont for those specials.

Went last Saturday night, and the portion is HUGE, btw! Enough carne for 3, very tasty, and enough to take home for a subsequent meal. While they have the prix fixe deal, if you order cassoulet a la carte, it is $36, higher than any other entree item, fwiw!
Waiting for Aaron Robins to prepare his at the Boneyard Bistro fairly soon to compare.