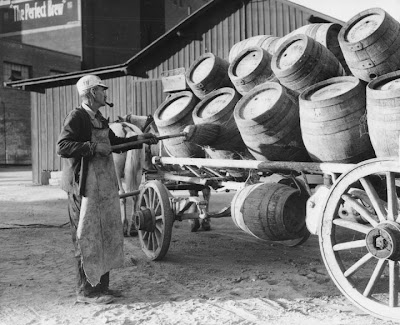 A worker brushes cobwebs off barrels at the end of Prohibition

Of course you've heard of the Brewery Art Colony, but do you know about the beer that was once brewed there? I came across a website called Rusty Cans while researching the L.A. Times story that told the fascinating story of the Eastside Brewery. 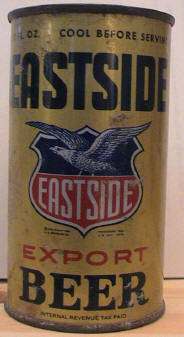 Eastside Brewing, which was also called Los Angeles Brewing and Mission Brewing at various times, was acquired in 1948 by Pabst, which eventually closed out the Eastside label, using the brewery to brew Pabst until 1979. During Prohibition, the brewery stayed in business by brewing beer and then removing the alcohol. They marketed the result as "near-beer" and also sold the leftover alcohol to doctors and dentists, who were allotted a certain amount for medicinal purposes. When Prohibition was repealed, they had trucks stocked with beer and ready to roll out at the stroke of midnight. According to the website, at 12:01, actor Walter Huston said a few words and Jean Harlow broke a bottle over the first truck in line. They took in a quarter of a million dollars that night -- Californians must have been really, really thirsty after 13 years without their ale! With several local brewing operations starting up, I think it's definitely time to revive Eastside Ale.
at 8:05 PM

I believe that Brew 102 was also located just east of Downtown if I remember correctly. Right of the 101 S before you got onto the 10 or the 5 freeways.

Correct on the Brew 102 location.
I used to see metal Eastside Brewery signs at the Pomona swap meet when I was a youngin'......agree, it should be revived!