Food writing must-reads this week: Thai restaurant is like "A nail salon on Venus"

Don't miss the New Yorker's food issue. I haven't even finished it yet, but there's two outstanding pieces so far: One is on "extreme beer," focusing mainly on Dogfish Head in Delaware. It's available in full online.
The other is available online only to subscribers, but it's worth picking up a copy if you don't subscribe. The Hungry Travellers profiles the extraordinary Naomi Duguid and Jeffrey Alford, who I knew about only vaguely before reading this. I had already been planning on 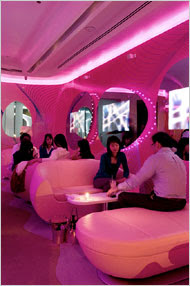 finding their book Hot Sour Salty Sweet before this, but now I'm going to do it right away.

Another great read is Frank Bruni's restaurant review in the New York Times this week, Gills, Fins and Psychedelic Thai, about a new Thai-influenced restaurant, Kurve (pictured at left), that despite a respected chef and design by Karim Rashid, seems to have taken its concept a step too far into surrealism. It's like "a nail salon on Venus," as Bruni describes it. Bad restaurant reviews are always much more fun to read than favorable ones, and this one is no exception. One of my favorite lines: "Rock shrimp went on strike in late October, or so I concluded from their failure to participate in the rock shrimp tempura, which tasted only of tempura."
at 9:48 AM

Ugh. That furniture looks flimsy and uncomfortable. If I want to eat on a coffee table or plastic lawn chair, I'll stay home. The lighting seems distracting, and all the pink would make me nervous and decidedly not hungry.

That said, some of the food looked pretty tasty, though not so unusual that I couldn't find it in a much more comfortable setting.

Mmmmm... looks like where the aliens convene to plot the next attack on the good guys, who in turn convene at Encounter at LAX.


Gotta say, while it'd be nice to have a few more "atmospheric" Thai places in Thai Town, this ain't exactly what I had in mind. . .

Me and my wife are fond of nice eating. We always do experiment for the taste bud. She knows some nice recipes. We consult The Oxford Companion To Food and this is one of the must reads. Stands out.