What's in store for restaurants: The Western Foodservice Expo 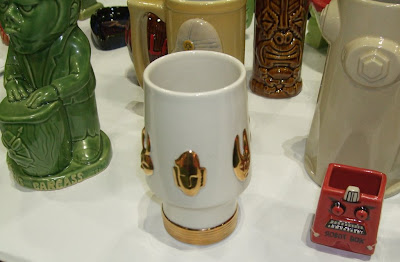 The Trader Vic's commemorative mug in gold. The folks at mug creators Tiki Farm say the new Trader Vic's is still on track for Downtown L.A. near the Staples Center.

EatingLA slogged through dozens of aisles of fry-o-lators and white chefs' coats at the Western Foodservice and Hospitality Expo this week to see if there were any food trends worth reporting. This show is mostly big on restaurant equipment, with just enough food samples to make a lunch of French fries from the Washington Potato booth, cheese from Wisconsin Cheese and ravioli from someone in Massachusetts. 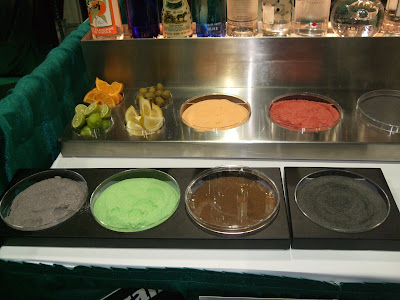 How about a ready-made bar complete with rainbow-colored martini sugar?

The Gourmet Food aisle and the Nightlife booth -- with several breweries and a few liquor companies -- were the best parts, as well as the Thai area. But it wasn't all just Crocs and biodegradable takeout containers -- there were several interesting booths.
At the Stone Brewing Booth, we sampled some of their excellent IPA and some complex Riptide Stout from Scotland's Brewdog. Stone's Stuart Knight also introduced us to The Bruery, a new Belgian-style craft brewery out of Placentia in Orange County. Their beers are available at Silver Lake Wine, Pure Luck and the Stuffed Sandwich. 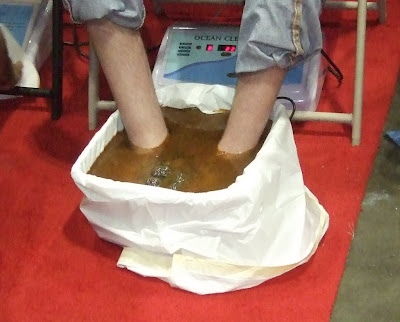 Not sure why soaking your feet in mud is part of the Restaurant Expo...

We tried a new line of liqueurs called La Tradicion based on Mexican aguas like jamaica, tamarindo, and horchata -- a little odd, but I'd check out the tamarindo

since I'm a sucker for that flavor. 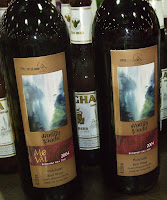 And at the Thai pavilion, where Tommy Tang was hanging out (remember when his restaurant was the hippest place?), we tasted longan, lichee and tamarind and found out that they actually make wine in Thailand -- Monsoon Valley red or white, pictured at left.
So it was an interesting afternoon, and hopefully we'll never go to a restaurant that sells all those frozen potstickers and taquitos they were displaying.
at 8:00 PM