The Waffle: tailor-made for hangovers and veg shopping 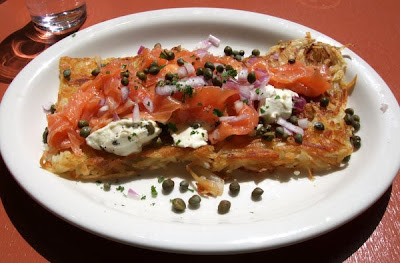 The Waffle's chef Scooter Kanfer has long been devoted to comfort food, and her latest establishment is a worthy addition to the resume, with entire menu sections devoted to baroque variations on waffles and hash browns. I waited a month or so for the hubbub to die down before chancing a visit; although the service was apparently befuddled when it first opened, we had no problems during a Monday lunch. I was lunching with another writer whose paper reaches oh, a million or so more readers than this blog, so it's probably just as well they didn't screw up. The interior has an odd layout; while the counter looked pleasant in a dinery way, the two-tops seemed a little tight, so we chose a space on the patio. Next to us a large party of young Hollywoodites lounged with their puppy and a giant slice of coconut cake; an even younger trio were seated on the other side with their Amoeba bags. 20somethings and patios equal smoking, so be forewarned. We didn't think to ask the pup whether he had tried the Woofles, waffle shaped doggy biscuits, but it's certainly a cute touch. 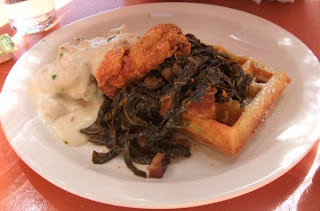 My hash browns with smoked salmon resembled a waffle-shaped latke and made a nice lunch, although it's probably a better plan to split an order and then split an omelet too. Toppings for hash browns range from semi-decadent to insane, including bacon, mushrooms, cheese, chili and corned beef.
This is basically sobering-up food, and the lunch and dinner dishes (burgers, chili, meatloaf, cobb salad, etc.) don't sound quite as tempting as the rich brunch fare. Maybe too rich, in fact -- does French toast really need to be soaked in vanilla bean custard? My friend had the "dinner" waffle (right), also known as "Roscoe's for white people." The cornmeal waffle is studded with jalapeno bits and topped with a fried boneless chicken breast, a vast quantity of gravy and lily-gilding greens with bacon chunks. It's a formidable amount of food, perfect for one hungover guy or three normal-sized gals. Lighter items are fortunately available, including gluten-free waffles, whole grain waffles with yogurt and egg white omelets.
It's going to be hard to hit the Hollywood farmer's market without hearing those waffles calling my name, although I fear weekends might be a zoo. But this rapidly exploding area of Hollywood can use all the restaurant help it can get, especially at decent prices. Except the parking. Five dollars seems a little harsh to park for a diner, but that's Hollywood, kids.
The Waffle is open until 4:30 am on weekends and 2:30 am on weekdays, has a full bar (maple martinis!), a kids menu and lots of vegetarian options too, if mock meats are your thing.
The Waffle
6255 Sunset Blvd.
(323) 465-6901
at 4:24 PM

What are the vegetarian options if you do not want to eat mock meat? Or are there any?

Oh and I hope you have seen the doctor about the issue in the last post . . .

Had breakfast last week at THE WAFFLE. All the servers and hostess were extremely nice. Letting us (Two) sit in a large booth for breakfast. They seemed a bit disorganized. Waited way to long for meal to arrive. Not very busy at the time. Waffle came luke-warm. I was asked by hostess how it tasted- I said very good, but it was cold. She apologized took it back; told me it would be replaced immediately. By the time it was delivered....about 15 minutes later, and it was the wrong order, I said, No thanks. She took it off the check.Eggs were good and hot and ham good. Don't know if I will go back soon.

Tried a few weekends ago - three people, dishes all came at different times, eggs ordered as 'over hard' appeared as 'over easy' and sent back and didn't return for 10 minutes, my side of toast never appeared, my friend's toast appeared after she finished her meal, no coffee fill up, wait staff nice but not particularly attentive.