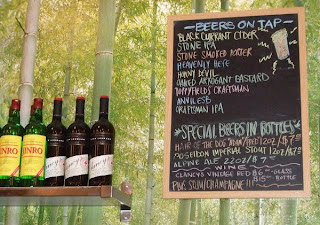 Life Elf Cafe in Echo Park, the Pure Luck is one of those places that could exist only on the near-Eastside at this point in time: a groovy vegan cafe with a loyal retinue of perfectly-scruffed young patrons sporting heavy tattoage, ironic eyewear and much facial hair, which just happens to have a killer beer list. Real old-timers will remember that the old building that houses the Pure Luck used to be Cafe Mambo, a happening Latino-style diner owned by the Cha Cha Cha family. 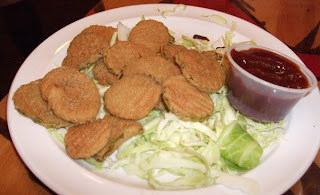 Well, it's happening again, but instead of chorizo and eggs, this time it's jackfruit carnitas (below left), one of the wonders of the vegan world with which I was not previously acquainted. You can keep your mock meats and such, because jackfruit carnitas tacos are strangely tasty and meaty, if perhaps a bit protein-deficient. I can never remember where to go when I want a big salad, but Pure Luck's salad selection sounded promising. There's also burritos, wraps, tacos, tortas and and an array of snacks to help sop up the beer. We tried the fried dill pickle chips (right) served with barbecue sauce, which I devoured scary fast, and the sweet potato fries with a sweet mustard dip, which were kind of limp. Beers are top-notch, including the Anvil ESB, one of my favorites, and the Stone Smoked Porter. 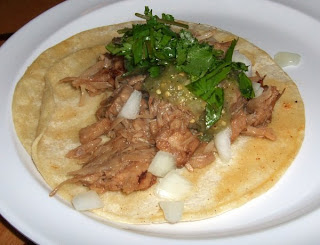 Fortunately Pure Luck sees the wisdom of offering half-pints so you can try a few varieties. There's also a tamarind/lime/soju cocktail that looks pretty good.
Verdict: Super cute, with some good dishes. I wish it was a bit more pub-like with lower lighting; instead it has more of a vegan diner feeling. Make sure to hit Scoops across the street afterwards for dessert.
Pure Luck
707 N. Heliotrope
(323) 660-5993
(lunch and dinner, closed Sunday)
at 8:53 AM

Oh yum... Pure Luck is one of my favorite places in town! I love what they do with jackfruit, the BBQ jackfruit sandwich is fantastic. And yes their salads are really great too, in particular the 'cold noodle salad' is excellent. Rice noodles, spinach, basil, bean sprouts, grilled tofu, peanuts and lots of lime... it reminds me of pad thai but a lot more fresh and without the tamarind flavor and artificial coloring. I agree with you about the lighting though, that's probably the one thing I would change to make it just a bit more cozy.

I'm pretty sure that this restaurant could exist outside just the near-Eastside. Venice could support something like this.

Can't wait to try it. Though I do wish the vegan places would stop with the cafeteria lighting - it's scary that this is now a "vegan dining" look. Were you thinking Tantawan? (Do I have that name right?)

Esther, Y-Que was actually just around the corner on Melrose.

Does anyone know if they are using organic ingredients?

organic or not, i can't wait to try it --- anyone that knows how to do jackfruit is cool in my book.

dear Anonymous,
Esther is right, and you are right: Y-Que was in both locations.
teeem