San Jose is cooler than you think 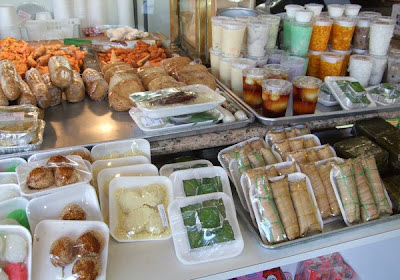 Desserts and snacks at Dakao

I admit it had been a very long time since I visited San Jose -- I pretty much missed the whole Asian influx as well as all the new architecture and development. So when I was up there for the Cinequest Film Festival this weekend, I was surprised to find a real city with electric trams like in Europe, good museums and thriving Vietnamese and Japanese communities. In between films and panels, I walked around the downtown area. Near San Jose State University, Vietnamese deli Dakao had plenty of tasty bahn mi choices for $2.50 each, as well as a vast array of desserts and snacks, Chinese food and pho. 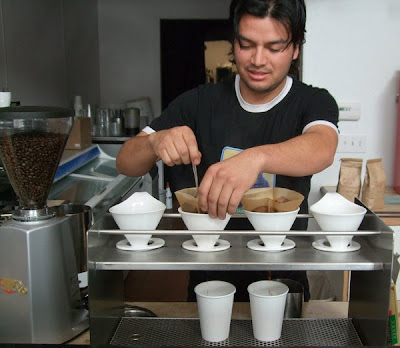 After alternating between Intelligentsia and Lamill at home, I felt it was my duty to finally try Bay Area favorite Blue Bottle Coffee. In San Jose, find it at Broken Door Espresso , a tiny coffee house across from City Hall with a laid-back vibe and a studious attention to excellent coffee. No $12,000 Clover machines here -- just a row of drip filters and an amazingly smooth and flavorful $2 cup of coffee. The Giant Steps blend was extremely mellow and chocolatey. Vietnamese restaurants are everywhere, so I tried a more upscale place for another lunch. Vung Tau looks like a Houston's inside, all brown and corporate, but the long menu is full of unusual and well-prepared dishes like tamarind seabass soup, lotus root, shrimp, pork loin and mint salad, or carmelized shortribs in an earth pot. 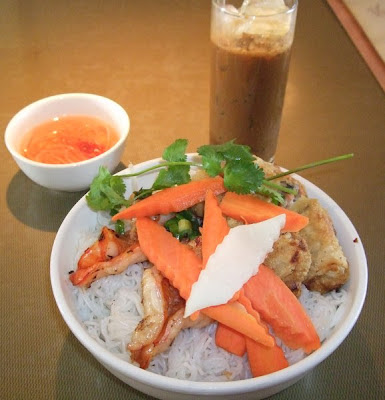 I had bun noodles topped with large charbroiled shrimp, pickled vegetables, and some of the best fresh, porky eggrolls I've had. It's not cheap, but the wine list is decent, and I'll bet it's hopping at night. Just down the street, Saigon 75 also looks like a good bet for fancier Vietnamese. There also seem to be plenty of promising looking taquerias, so if you find yourself in San Jose, don't worry, you'll be eating well.
at 9:30 AM

I am a recent immigrant to Los Angeles after 20 years in San Jose. The South Bay has several vibrant and growing immigrant communities, and a wide variety of low-cost, delicious eateries.

A good starter is the Silicon Valley Dive List: http://www.webdives.com/listings.php