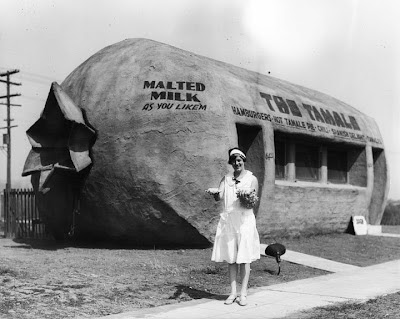 It's funny, I don't usually crave a malted milk when I think about tamales, but apparently this fetching flapper will serve you both at East L.A.'s iconic The Tamale on Whittier Blvd. Is it really a beauty salon now? And wasn't there a chili bowl somewhere on Olympic in West L.A.? 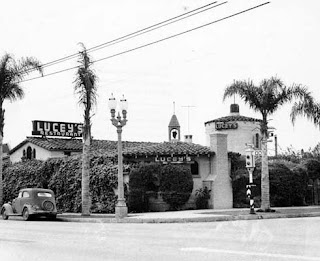 Some Mexican restaurants have stood the test of time, barely needing to update their menus in the last 70 years. Is it any suprise they all serve stiff margaritas as well? At left, Lucey's El Adobe on Melrose was apparently spelled differently back in the early 1930s. 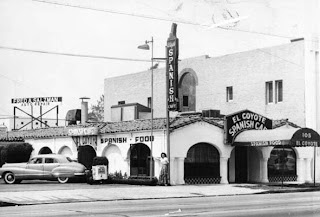 At right, some of the food at El Coyote seems like it might have been purchased in 1940, but we're happy that any place can stick around that long. 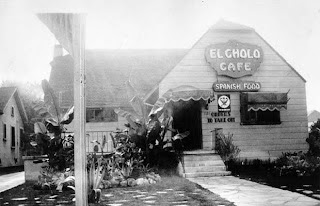 This photo of El Cholo is from 1937, but the restaurant first opened 10 years before that. It looked so tiny back then! Ntoice that they all advertised "Spanish" food although I'm sure there was no paella to be found -- Mexican food was a no-no back then.

There were at least three chili bowls still standing about 12 years ago when I did a college paper on programmatic architecture in L.A.: one on Olympic near the old Music Machine; one on Valley (?) not too far from the Tamale; one on San Fernando in Glendale; I think there were originally a couple more.

Anonymous; Sounds like a great subject for a college paper!

Small errata; If by "Olympic" you mean "Pico", you're right.

The old Music Machine was on the south side of Pico, between Bundy and the 10 freeway overpass.

The chili bowl is still with us (although not painted to look like one anymore.) It's just east of Bundy, on Pico, and now has a BBQ place in residence.

Hello! I just thought I'd extend an invitation to a network of Los Angeles bloggers.. It's a great way to get more readers and find new and interesting blogs: http://labloggers.ning.com/?xgi=5mcqS7g

Michael, I *knew* Olympic didn't sound quite right. Pico it is! Nice to hear it's still standing.

Hi Pat! I think that Lucy's El Adobe on Melrose was actually not a Mexican restaurant in its previous incarnation as Lucey's...I will confirm with my friend, whose grandfather owned the place originally. It's possible that it was Italian.