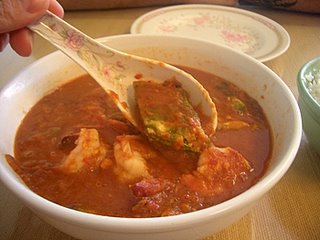 For my first foray into North Hollywood Thai food outside of the Thai temple, I picked Swan restaurant, because I thought their menu of small plates would be fun to try for lunch. But we weren't given any menu with small plates in the $2-3 range and I didn't see any lying around. By then we were engrossed in the regular menu so we chose three regular-sized dishes which turned out to be som 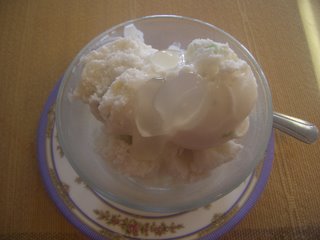 e of the best Thai food I've had in ages (well, since I did the Renu Nakorn report, anyway). We ordered the more familiar Crying Tiger beef and the Nam Sod Kao Tod crispy rice salad and then took a flyer on a dish called "Thai Acacia Curry," (pictured above) described as "fish and tamarind paste curry with Thai acacia omelet and vegetables." This dish certainly sounded unusual and we had a moment's hesitation when it arrived, giving off a strong fermented fish smell. But when we dug in we found a dish of shrimp and omelet triangles floating in pungent and flavorful red curry gravy with a perfect spice level -- nothing to be scared of there. Acacia is a feathery green plant often used in Thai omelets, and it was akin to having little slices of 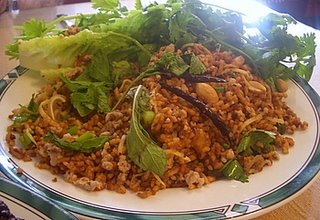 spinach frittata in your curry -- unusual but tasty.
The crispy rice salad (photo at left) with ground pork and ginger was delicious, with a little burst of spicy or cilantro or peanutty flavor in every bite, but the rice wasn't as ethereally crispy as at the Lotus of Siam in Las Vegas. The crispy beef tidbits of the Crying Tiger were already good, similar to Korean grilled shortribs, but the smoky, sweet, fiery dipping sauce elevated it to a whole other plane. We finished with a creamy, refreshing dish of coconut ice cream with corn and green beany things strewn throughout the ice cream, topped with clear gelatinous blobs -- palm seeds perhaps?
I am so annoyed that all the good Thai restaurants are in North Hollywood now! But it's not that far, so I'm also looking forward to trying Sunshine, Krua Thai and Sri Siam, and maybe returning to Swan to demand the small plates menu.
Swan restaurant
12728 Sherman Way
North Hollywood
(818) 764-1892
at 6:36 PM

I just had dinner there and yes! It was VERY good! I've been reading about it on all the LA food blogs so I had to give it a go... and I didn't see the small plate menu either so I asked for one and she brought it out. We didn't try any of them though. (we were too gaga over the big menu) great find... I'm going to the Wat Thai Market tomorrow morning. It's a big thai weekend.