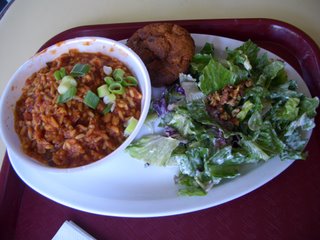 I've probably eaten at the Gumbo Pot far more times than at any other Farmer's Market stall, but until fairly recently I always got the fried shrimp or the jambalaya (shown at least). During my lamentable Atkins phase, I checked out the forgettable seafood salad, and now I've come to rest at the fried catfish. As with most market eateries, it's probably not even the best fried catfish in L.A., and it certainly doesn't equal some exemplary examples like the one served at Lasyone's Meat Pies in Natchitoches, Louisiana. But it's a darn satisfying plate, involving a nice medium-sized mild fish nicely fried with a crispy cornmeal batter and the sweet corn muffin that I've always been fond of. For the side dish, I always used to order the green salad with its honeyed pecans that seemed so innovative in 1987, but I recently discovered the collard greens, which despite being vegetarian, pack a fragrant, swampy pot likker. The red beans and rice are pretty good but very filling, but the gumbo doesn't add up to quite as nice of a stew as the rich jambalaya. The beignets are another nice southern touch, but I haven't tried the New Orleans style brunches.
3 carts
at 3:37 PM

Surely you owe it to your readers to try the alligator tail!

The quality of the place has gone to hell in hand basked since Clinton made a deal w. the previous owners and took it over about 2 years ago. Its awful now. I used to visit all the time for almost 20 years but haven't been back. Try Harold&Belles on Jefferson for real Cajun cooking.

OK, Luke, we'll try the alligator if you will too.

I've had it there a couple of times.

Best gator I ever had was in North Carolina at a Cherokee restaurant, though.

It's sorta halfway between chicken and fish. Pretty awesome.

The Oyster Poboy rocks but you have to add extra Oysters. Yum

probably the best in L.A., behind a Sizzler, small, friendly, adorable chef

I had the "alligator" at Gumbo Pot about a month ago. It looked, tasted and smelled A LOT like mahi-mahi...I'm not convinced it's actually "alligator." CAVEAT EMPTOR!!