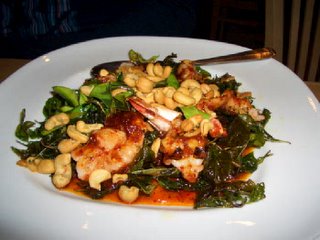 spicy herb shrimp
We returned to Red Corner Asia to make sure our first positive experience wasn't a fluke, and because, well, we just wanted some more tasty Thai food. I had to try the spicy herb shrimp, which was the winner dish, with several butterflied shrimp wading in a little tamarind pool. The shrimp were covered in crispy brown slices of garlic and cashews which were in turn blanketed in a blizzard of deep-fried basil leaves. It's a pretty nice little combo of sour, crunchy, fruity and garlicky, and not really like any Thai preparation I've had before. We also ordered a competently-made red curry with chicken, and kung pao pasta, another fusion attempt which grafted the peanuts and peppers of a kung pao dish onto regular spaghetti, in our case with beef. It was satisfying, but not a dish for Thai purists.
Verdict: After two visits, I think I see what they're doing. The sauces are bright and lively, as spicy as you wish, with tons of flavor. But there's a certain sweetness, which combined with a lack of funky fish sauce and bamboo shoot flavors sort of adds up to a Thai Gingergrass, but with more Thai customers. I like the menu though, because even the more unusual dishes don't involve quite as much pig uterus et al as they do in the super-authentic places. In short, this is a place you can take your less adventurous friends, and still find something spicy and different for yourself.
at 8:17 AM