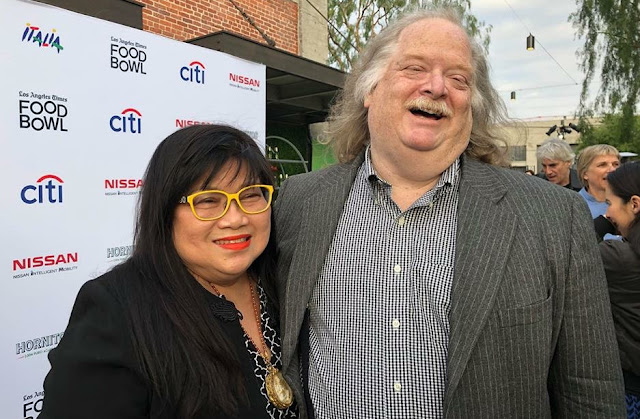 Many have eulogized Jonathan Gold far more eloquently than I could, but when the Los Feliz Ledger asked me to look back at the restaurants he loved around the Silver Lake area, I was happy to comb through his reviews.

One of the many admirable things about Pulitzer Prize-winning food writer Jonathan Gold, who died July 21 of pancreatic cancer at 57, was that he didn’t slavishly chase trends. Oh, he was quick to try the newest place to open, and excited to tell his readers about it, but he was also faithful -- sometimes inscrutably faithful -- to some of his old favorites, places that managed to hang on for decades as flashier spots opened around them. Those old favorites included East Hollywood’s Marouch and Thaitown’s Sapp Coffee Shop, which re-appeared like clockwork each year on his 101 Restaurants list.

When he wrote about Sqirl, you just didn’t get a review of a place that served toast. You got a literary disquisition, a reference to a place in Spain that only served toast, his knowledge of Jessica Koslow’s deeply-flavored jams from the farmer’s market.

Even when they were served with a side of gentle ribbing, his reviews managed to sum up how the food fit into this point in time, the neighborhood -- essentially what it felt like to be there, not just to eat there.

“I ate this toast outside in a sort of side yard next to the restaurant, chased with sips of milky espresso, in full earshot of the auto body shop up the street and the banda music pounding from the passing cars. It didn't just reflect a Silver Lake afternoon; it was a Silver Lake afternoon,” he wrote when Sqirl first opened.

Gold had a deep reverence for Thai food, one of the formative cuisines of Los Angeles, from the comforting boat noodles of Sapp to the fiery Isaan cooking of Night+ Market to the possibly even more incendiary Southern Thai dishes of Jitlada. On his first visit to Jitlada under the cooking of the late Tui Sungkamee, he wrote about the kua kling curry, “The heat was almost unbearable, and I was surprised to briefly lose muscular control of my knees, but the curry was undeniably better, more balanced in flavor, than it had been in its slightly deracinated version. And then the endorphins kicked in.”

Night+Market owner Kris Yenbamroong has said that his West Hollywood restaurant risked failure until Gold stepped in to write about it.

“He literally pulled us back from the brink,” the chef, who went on to open Silver Lake and Venice locations, told the L.A. Times.

At Kismet, the food reminded Gold of the vegetable-driven cooking of Alice Waters, and his descriptive powers were in full flower.

“You dip tiny halved turnips into sweet butter glazed with salty-tart preserved lemon and chase them with a draught of fizzy natural wine,” he wrote.

Gold admitted that restaurants in the Silver Lake-Los Feliz area tended to be more trendy than serious, but he admired Alimento, saying of owner-chef Zach Pollack, “Silver Lake may be an appropriate place for chefs as well as musicians to go indie.”

At Salazar, he spent a lot of time contemplating whether they got the flour tortillas right, but he also seemed to relax into the restaurant’s Austin-eque atmosphere.

“The side dishes are kind of great,” he reminded, “gooey potato purée with small, plump sausages floating in it like strawberries in oatmeal; chilled, fire-blackened corn kernels tossed with chiles, cream and herbs; beans cooked with all manner of pig products.”

One of his last reviews was of Freedman’s, the nouveau-Jewish deli on the Silver Lake-Echo Park border whose opening chef spent time at Noma. As a uber-nosher who was eating at Junior’s Deli in Westwood long before the entire staff of Freedman’s was born, he seemed bemused, captivated, and utterly intent on capturing the restaurant’s essence -- in the singular way only Gold could do it.