It's not quite L.A.'s oldest restaurant, but Taix French Restaurant is certainly one of the city's most beloved. The venerable old-school French dinner house, which moved to Sunset Blvd. from downtown in 1962, celebrates its 90th birthday this month with a traditional roast chicken dinner for 90 cents.

On Sunday, Oct. 8 from 4 p.m. to 8 p.m., Taix will serve soup de jour, salad, and Taix Roast Chicken with au jus. Of course there will be a big line, so consider celebrating this long-lived institution at another time when the full menu is available.

At a recent anniversary reception, owner Michael Taix, grandson of founder Marius Taix Jr., said he would recommend diners try the trout almondine, the frog legs, the boeuf Bourgignon when it's offere as a special, and of course the roast chicken.

Taix also reminded us that chef Laurent Quenioux continues to consult on the menu a few days a week, making sure the cooking is more authentically French than it has been probably for decades.

Taix opened at 321 Commercial Street downtown in 1927, serving chicken dinners for 50 cents. After the Hollywood Freeway was built, it moved to Echo Park where it has been ever since. 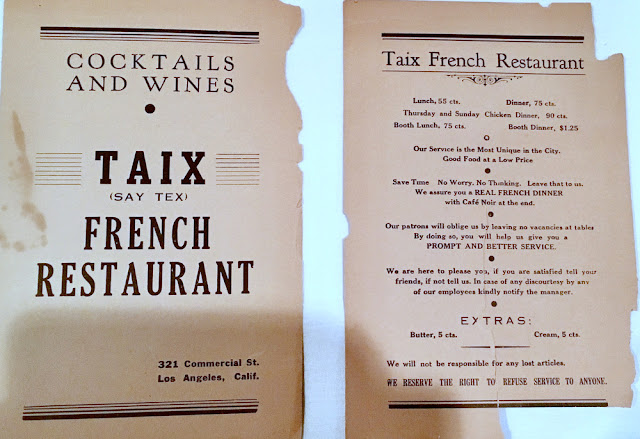 I love the slogan on one of the original menus that the family preserved: "Save time, no worry, no thinking. Leave that to us."

So what are L.A.'s very oldest restaurants? Philippe the Original and Cole's were both established in 1908, while Musso and Frank came along in 1919. After that, Barney's Beanery, Pacific Dining Car, Original Pantry, La Golondrina and El Cholo came along during the 1920s. Make it a point to try all these places while they're still going strong!