I once sent a long letter to the L.A. Times about where I remember eating growing up, long before blogs and Vintage Los Angeles and Old L.A. Restaurants. Here's an expanded version of my L.A. eating memories of the 1960s and '70s.

My parents loved nice restaurants. They both grew up eating boring Illinois food -- in my father's case, his mother was a terrible cook who mostly mangled Jewish staples, and he felt liberated and excited to try pizza and spaghetti for the first time in the Army during WWII, though he never lost his taste for Hebrew National salami fried up with eggs and sardines with Gulden's spicy brown mustard on crackers. My mother grew up in a small town famous for corn and pork tenderloin sandwiches. The corn-on-the-cob was uber-fresh, but it was plain cooking, and she was dazzled by encountering artichokes and shrimp DeJongh when she moved to Venice Beach after high school, and later Manhattan and Chicago.

So when they came to Los Angeles, around the time I was born, they began taking me to restaurants right away -- or at least as soon as I could amble around visiting tables at the Brown Derby informing diners that "my daddy is a producer," as a vintage Hedda Hopper column noted. Of the Brown Derby, I remember the pumpernickel toast best, buttery, warm and slightly crispy, nesting in a cloth napkin-covered basket. There were also tiny hamburgers that I thought had been invented just for me, each with a separate sauce -- ketchup, sour cream, Russian dressing. When sliders appeared decades later, I wasn't too impressed after having moved directly from baby food to adorable mini-burgers at the Brown Derby.


We went most often to the Hamburger Hamlet, usually the one on Rodeo Drive. We were friends with the owners, the Lewises, and I remember a gala event at their Beverly Hills house with the swimming pool covered by a temporary dance floor. Like everyone else, we adored Those Potatoes and were impressed with the variety of toppings on the burgers, a new idea at the time. There was another Beverly Hills burger place -- Hamburger Habit? -- that advertised even more toppings but we were loyal to the Hamlet, which is the only place I ever remember my father ordering a beer.

Ice cream was one of our family's principal food groups, and our usual spot was the Baskin-Robbins on Canon Drive where black and white murals of placid grazing cows lined the walls. My mother and I were mad about chocolate Mandarin orange sherbet, a flavor that doesn't ever seem to get revived but is fondly remembered by many. My parents took me there in my footie pajamas and we went after my cat Fido was run over, as ice cream was thought to salve all wounds. But just Baskin-Robbins wasn't enough.

There were also Wil Wrights and Blum's. Blum's was on Wilshire, and was famous for crunch cake with pieces of sponge candy deliciously suspended in a whipped cream frosting. Wil Wright's was on South Beverly Drive (also in Sunset Plaza) and had refreshing frappes in exotic flavors like pear. My mother grew up eating at drugstore lunch counters, and liked the cherry phosphates and lemon cokes at the fountain at the big Owl Rexall at La Cienega and Beverly (still a drugstore, but no more fountain, alas.) This was of course across from Beverly Park, or Kiddyland as we knew it, where my divorced dad took me to kill a Sunday afternoon, but I also remember my mom taking me to a big discount Standard Shoes next to a pumping oil derrick where the Beverly Center now stands. Later, when we moved to Westwood, we went often to Swenson's Ice Cream, where the best flavor was a coffee-caramel-mint combo. 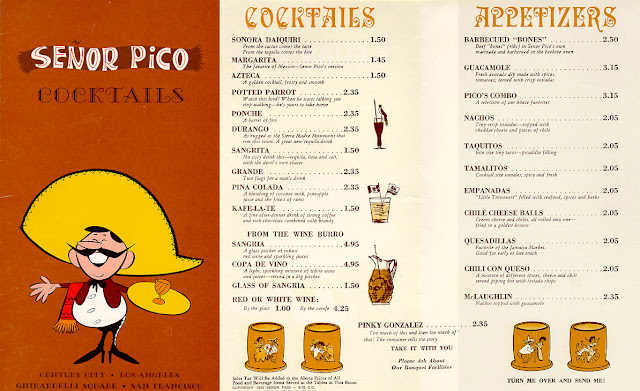 My father found Mexican food fascinating, but it was way too early for most Westside white folks to try to find the real thing. We had to content ourselves with the blandly corporate Senor Pico in Century City (strangely, they still exist in places like Dubai) and a place on Santa Monica Blvd. near San Vicente. By the early 1970s, interest in Mexican food had started to pick up, so every Saturday we had lunch at the Sundance Cafe on Robertson, where modern Cal-Mex like fried tostada bowls was just getting off the ground.

It was my mother who somehow got the bug for ethnic foods, maybe because she had lived in Manhattan or because when she worked as a librarian for Playboy in the 1950s, her friends would take her to eat in Chicago's Greek and Polish neighborhoods. She never met a church food festival she wouldn't check out, so we traveled up Pico for a Greek fair, way out to the valley and wherever baklava or other ethnic forms of buttery dough could be found. I doubt I ever set foot in Silver Lake as a child, but if she had known about St. Casimir's annual Lithuanian festival, I surely would have.

She hated driving and gave up her car before I was old enough to drive, so we took the bus all the way down Wilshire from the beach to Chinatown. We spent weekends scarfing pork bao and shrimp har gow decades before most people got around to it, usually at the Golden Dragon. We also took the bus to Little Tokyo (I can't really wrap my mind around people calling it J-town). I remember the red bean pancakes from Mitsuru Cafe being made in the same metal molds that are still in the window, though it was in a different location. I remember a tempura bar on First St. where we sat at a counter with our backs to the street, watching a man fry up course after course of battered shrimp and vegetables. It's no wonder I remain obsessed with fried seafood to this day.

When we still had a car, we drove in from Malibu to Santa Monica every Friday night, alternating between chicken pot pie at House of Pies and fish 'n chips at the Mucky Duck. (Again with the fried seafood!) Afterwards we walked the Santa Monica mall, where a very groovy tiki-themed coffeeshop called Horace Heidt's Java Time was one of the better places to eat, a step up from hot dogs at Orange Julius and the Newbery's dimestore lunch counter.

After Sunday school at the Methodist church in Beverly Hills, we would go to Nate 'n Al's for eggs 'n onions or cheese blintzes, although when I was almost too young to remember, the deli of choice was Linny's, a vast and bustling restaurant on Beverly Drive. All the smoked fish at the counter kind of intimidated me, with the scaly, gelatinous skin and sturgeon's eyeballs staring at me, but I loved going home with bags of brunch materials and constructing onion bagels piled high with cream cheese, chopped liver and coleslaw, even if I hadn't yet acquired the taste for lox or tongue. If you were lucky, you could pick out a Jewish candy at the cashier on the way out. I tried halvah and appreciated the chocolate-coated orange gels, but my favorite was the large orange and red fruit gel bar with a white stripe down the middle. Imagine my delight when I discovered pates de fruits in France a few years later that were much the same as the Joya candies, but with deep, true fruit flavors.

After deli food and and ice cream, Polynesian food was perhaps the next most important food group, and the Luau was my favorite. We also went to Trader Vic's and the Palm Springs Trader Vic's, but only the Luau had a gift shop and a lagoon with a bridge over it. My dad always ordered a pupu platter of sticky sweet spareribs, eggrolls and fried shrimp, then declared we were all full and didn't need to order more. But we always did -- I have no idea what the adults ordered but my mom had instructed me that "silver noodles with pork" were the best dish on the menu, and indeed this Americanized version of Filipino pancit was starchy and satisfying. I also got a virgin pineapple drink -- a whole pineapple filled with a juice "cocktail" and though the restaurant had an amazing array of zombies and other grog drinks, my family weren't big drinkers. Variety editor Peter Bart once told me the Luau bar was full of expensive call girls, but I had no idea about any of that -- I dimly remember a bar near the entrance, but much clearer is the strong licorice bite of the Sen-Sen candies they handed out at the cash register.
at 5:04 PM

Loved the Luau! Does anyone remember a place on San Vincente in Brentwood called The Carousel or The Parasol? A great ice cream parfait place owned by Mickey Cohen's sister.