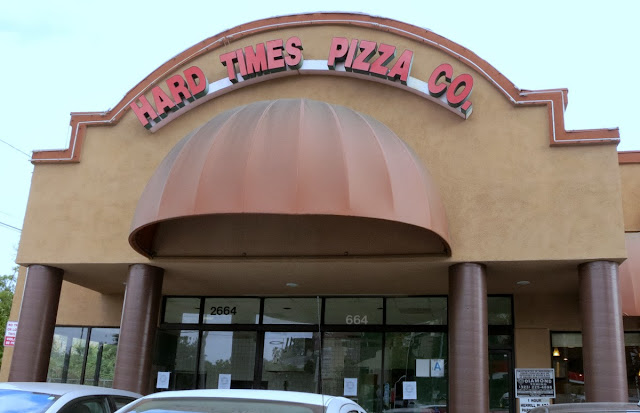 With Nicky D's and Hard Times closing within a week or two of each other, it's out with the old and in with the newer pizza guard in Silver Lake. Wood will be opening in the old Tom's Burgers space on Sunset soon with the silly logo, while many pizzaphiles have moved on to Mother Dough, Lucifer's, Tomato Pie and Garage to name just a few.
Hard Times, where I probably ate hundreds of pies in the '90s, is cleaned out inside. A sign on the door explains that the rent was raised too high for them to continue. They've already reopened at a former Domino's location on Glendale Blvd. in Echo Park, according to the Eastsider. Their pizza was fine when there was little else in the neighborhood besides Pizza Buona and Domino's, but not all that impressive once you tried the newer entries. Meanwhile chain restauant Z Pizza is apparently moving into the Hard Times space with its California Pizza Kitchen-esque menu of pizzas and salads.
Nicky D's was terribly inconsistent -- lodged in an old house with a problematic parking lot, it had moments of wood-fired greatness, especially at the beginning 11 years ago, mixed with screaming at the servers, forgetting that your pizza was sitting on the counter while you were waiting with hungry small children, forgetting to deliver your order, etc. The owners said a new restaurant will be moving in.
We usually go to Tomato Pie, since it's the closest, but I also like Mother Dough when it's not too crowded and there's no kids to feed and Lucifer's for the fiery ring-burner model. Will you miss Hard Times and Nicky D's?
at 4:33 PM

No! It is terrible, has been since the four original owners sold it to the nephew. Who then cut every cost and quality that it ever had. The last two owners shouldn't even be in the restaurant business. So it has pretty much been on a massive downward spiral since 2001.

I mean they sell watches with the slices on display, do you really need to even talk about the dough press (Not by hand), the screens, the frozen dough (Not from NY) and all the horrible service and disgusting decor.

Been to this place before its great!

No I never had a good experience at either place. I'll stick with Garage when I'm in the area.

Its funny to me when people talk about how pizza is made and think somehow they can judge the pizza quality. I've been making pizza for over 12 years, worked in NY and LA. Mostly in LA (acting on the side). Nothing wrong with a dough press, you don't get the uneven crust that people are nostalgic for but it works faster that a rolling pin. Using screens means they're using deck ovens (fire underneath concrete slabs). Next to conveyor ovens (dominos, pizza hut), deck ovens are the most common ovens in the industry. You need screens or the dough would burn before the cheese melts. Frozen dough... Mozza uses frozen dough. I know, I used to work there. Dough is from Lamonica out in Vernon, look it up you pretentious knuckleheads. And who the hell around here gets dough from NY?? If they say they do, its bullshit 100%.

I didn't like what the owners were doing to Hard Times either but pound for pound one the best slices in town next to Vitos and Village Pizzeria in my humble opinion. Can't say on the delivery pizzas cause I never ordered (there is a difference knuckleheads) but the house slices are as NY as you going to get in this town. The pizza cook has been the same since the original owners, I know this cause I know the guy. Been there since 1986.