A dedicated beer drinker could have a very pleasant beer crawl in the Atwater area these days: Start at Golden Road, hit the Glendale Tap on San Fernando Road, then bounce between Glendale Blvd.'s Link 'n Hops and the brand-new Atwater Village Tavern, depending on whether she or he is in the mood for sausages or Mexican-influenced beer-drinking food. (Add a stop at Eagle Rock Brewing or Verdugo Bar for extra beer points).
Just a few doors down, Club Tee Gee reps the prototypical dive bar vibe, while Atwater Village Tavern hits a more modern note with a dog-friendly seating in front, rustic wood paneling and plenty of chalk for the blackboard walls that might keep the kids quiet while mom and dad sample craft brews.
The food, handled by the folks from the Stop Guac 'n Roll truck, leans mostly Mexican with the addition of a solid burger and somewhat odd "avocado fries" -- a few pieces of battered and fried avocados on a pile of chips that basically amounts to more caloric guacamole.
Tacos, burritos and tortas are made with house-smoked meats including brisket, pulled pork and chicken, and while $11 for three tacos seems a tad high, they're meaty enough to share and come with freshly-fried tortilla chips.
A rotating selection of craft beers includes mostly Southern California choices, naturally including Eagle Rock Revolution XPA, Golden Road Hefeweizen and Get Up Offa That Brown, Angel City Eureka wit and my favorite of the evening, Monkish Oblaate Belgian golden ale from Torrance. From outside of L.A., tap selections include Stone Pale Ale, Cucapa Chupucabra from Mexicali, Ballast Point Sculpin IPA and Goose Island Summertime all the way from Chicago. 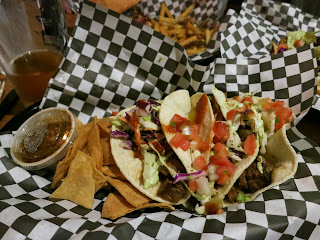 With a good selection of bottled beers, a few wines and a basic selection of hard liquor, AWT has all the booze bases covered. For true neighborhood flavor, try the Atwater special, a PBR with a shot of tequila for $5.
With the arrival of Village Tavern, Atwater is becoming an excellent neighborhood for beer drinkers -- better, in fact, than neighboring Silver Lake, which doesn't really have any craft beer-focused spots. And with plans to open at 11:30 every morning soon, it's a good spot for a Sunday afternoon brew too.

huzzah, you beat me there and i'm only a few blocks. can't wait to try!

Hell, even the restaurants are stocked with craft beer....Blair's. Cliff's Edge. L&E. Home.

And...if you are going to Glendale Tap, which is--eponymously--IN GLENDALE, or Golden Road, which is nearly in Burbank, and not at all "pub-crawlable" from Atwater-proper, then let's go ahead and include Mohawk Bend in the Silver Lake crawl as it's barely over the Echo Park line.

It's true that there are many better beers available in restaurants than just a few years ago, and Barbarella does have a good selection. But I just wouldn't call either Barbarella or Hyperion a beer-focused bar in the way that El Prado, Glendale Tap and places like that are. Of course Mohawk Bend is but I was talking strictly Silver Lake.