Between remodeling Variety and remodeling my kitchen, blogging at EatingLA has been slow over the past few months. But that doesn't mean I haven't been eating out. During the month that my kitchen was being remodeled, we took did plenty of take-out and delivery in the area, including Mae Ploy, Wat Dong Moon Lek, Tomato Pie and Mezze. I even tried cooking a traditional Italian long-cooked ragu on a plywood counter with no kitchen sink, hopefully for the last time ever.
The process was about as painless as a remodel can be, considering I've never remodeled anything before and was trying to keep the price as low as possible. Matt and I are not particularly gifted do-it-yourselfers, and we've both got a heavy work schedule, so we weren't going to be able to do much of it ourselves. I once tiled a counter, it was fairly painful, and I'm not married to the person I did it with anymore, so there you go. I'm pretty good at painting, but since it was included in the contractor's total price, I just let him do it.
However I did find and hire the countertop supplier, buy the sink, faucet, etc., at Home Depot, order the fridge and dishwasher and buy the interior fittings and handles at Ikea.
If anyone is planning on redoing a kitchen, here's a few things I learned along the way, as well as some basic costs.

What: Silver Lake house built in the moderne style in 1939 with original cabinets, badly-done newer tile countertops. Vintage-style floor tiles and stainless Frigidaire stove were only a few years old, so I decided to keep them. Old white dishwasher and fridge would have to go, along with everything else. The cabinets were too old and gross and strangely-sized to consider keeping.
Budget: Around $16,000 (I refinanced and took out some funds to keep the house updated.)
How: My contractor Arturo had remodeled a friend's bathroom for a good price. He's a straightforward guy who does clean work and the estimate came in lower than a few others I got, from contractors who had some crazy ideas about the fairly simple job. One wanted to cut a door in my living room, build a corridor through the garage, and close off the door to the downstairs bedroom. This would have been a $50,000 way to gain another two feet of counter space. No thanks.
What I did beforehand: Lots and lots of online research. In addition to obsessive reading of Apartment Therapy and a shiny new Pinterest account, I discovered Houzz and input every combination of counters and cabinets I could think of.

The design philosophy: I wanted my kitchen to harmonize with the house's 1930's features but also be the kind of kitchen buyers want, just in case I ever put the house on the market. That meant no chartreuse countertops, cobalt blue cabinets or other whimsical ideas that were too "me." The personal touches would come through my accessories and decorations rather than in the large, unchangeable items.
My kitchen is quite small and adding square footage and fancy features wasn't possible within my budget. It's actually quite convenient for cooking, but I didn't like how closed off from the dining room it was. The budget-friendly solution was to take out just the top part of the wall above the stove, adding a handy wide ledge and opening up the room to conversation with the diners.

Cabinets: I looked around for just a little while before settling on Ikea Adel white cabinets. My contractor recommended them, and anything more expensive would have been overkill for the small space.
Countertops: I like the look of marble, but it sounded too hard to maintain, not to mention expensive. We went with Caesarstone quartz, in the vaguely marble-like Misty Carrera design. It wasn't cheap either, but looks great and is very low-maintenance. Unless you're on an extremely low or much higher budget, I think it's the way to go.
I used Star Marble and Granite in North Hollywood, which did a good job and was about as cheap as you can get.
Other features: I found a good, reasonably-priced sink and faucet at Home Depot, but I had to order the pendant lamp and water filter system I wanted online.We used plain white subway tiles from Home Depot -- I liked the colored glass ones, but they just seemed too modern for the house, and were way more expensive.
On the day before the contractor was going to arrive, I put most of the pots and pans and stuff that's not often used in the garage. And unfortunately, all of my carefully-collected spices. Then we bought a steel shelving unit at Target, put it together in the dining room, and put pretty much all the food and most of the dishes and glasses on it, along with a few essential pans. The microwave, coffee maker and toaster oven also found temporary spots in the dining room. 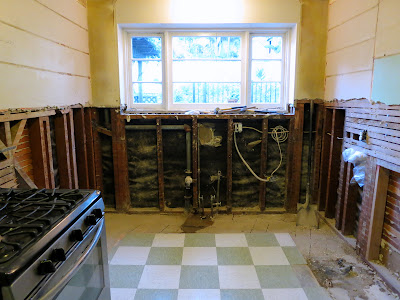 Day 1: Cabinets are removed, lower walls taken down to the studs, beer cans found. Fortunately, nothing was as rotten as I had feared it could be. 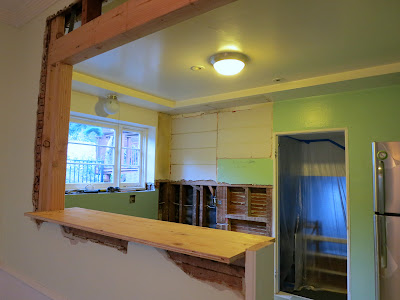 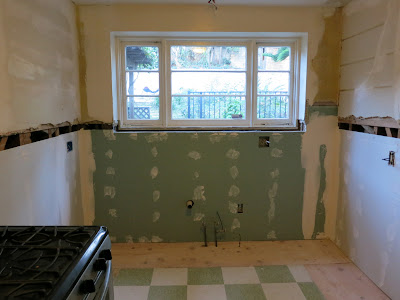 Day 4: Blueboard is installed on the wall where the sink will go.A new subfloor under the cabinets will keep out critters and rot in the future. 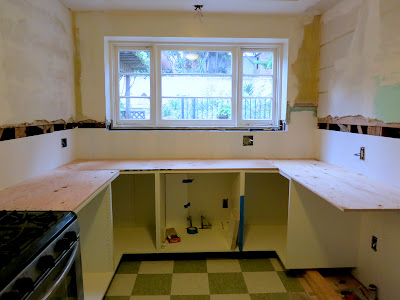 Day 5: Lower cabinets go in, plywood is in place to receive countertops. 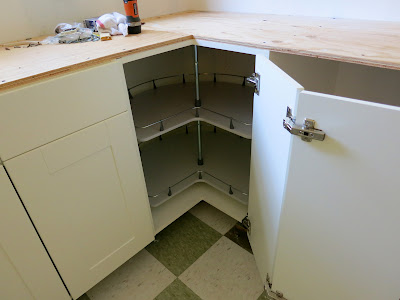 Note the nifty lazy susan in the cabinet where the Tupperware graveyard used to take up all the inaccessible space. 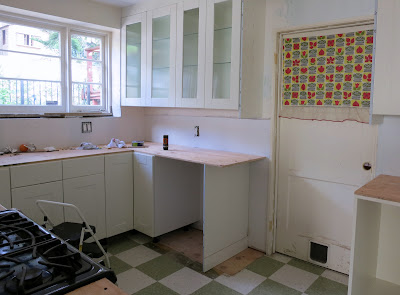 Day 8: Upper cabinets are in. 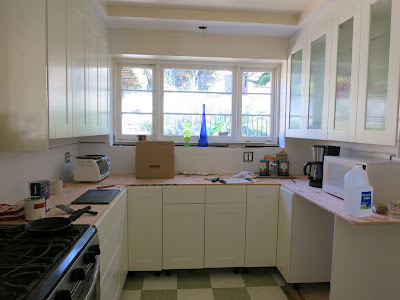 Day 17: Wait, here we are at day 17 and there's still no kitchen sink. We're operating on a plywood countertop, and meanwhile my sister and brother-in-law visited for three days without a real kitchen. This is starting to get a little old. Even living without cabinet handles is getting tiring. Click to the next page to see how it looks all finished. 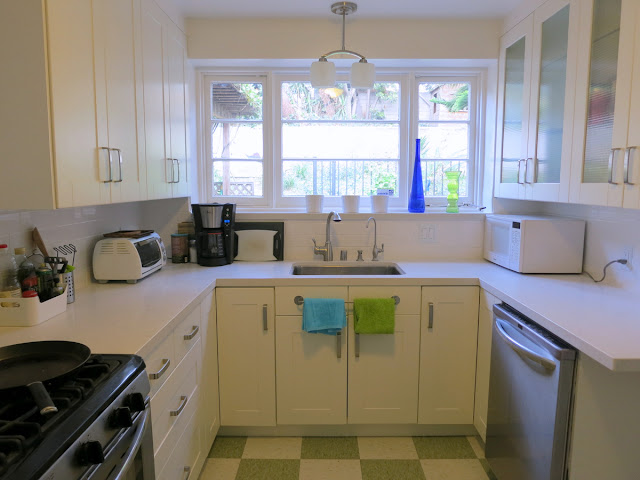 Days 22-25: Ah, that's better. Countertops and sink have been installed, everything's pretty much done and moved back in. 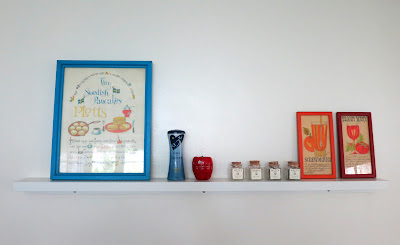 I wanted a plate rail along the refrigerator wall so I could switch out art and rest my iPad there. The first time, it got installed upside down though. A minor snafu. So now that it's all done, here's a few things to keep in mind. 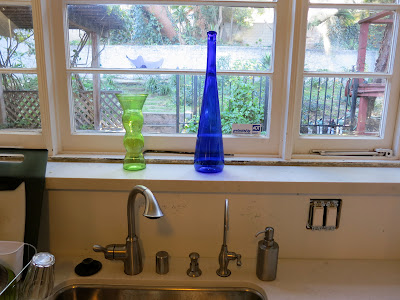 1. Before they cut the stone for the countertops, make sure your faucet and everything else will fit. Even though the stone guy used the templates for holes that came with the sink, the water filter, detergent dispenser, air gap and faucet were not going to all fit. So the faucet had to be installed on the far left, off center. At least we're both left-handed, but still, not ideal. Also, consider ponying up for one of those fancy new push-button garbage disposer buttons to save space on the wall outlets. 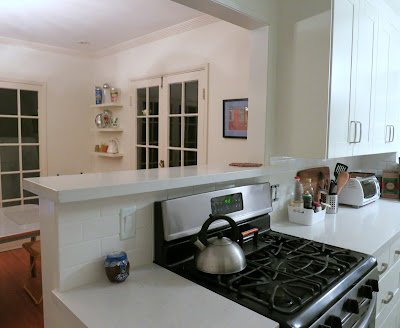 I love the new pass-through, though if I hadn't already bought the stove, it might have looked cleaner to get a more expensive drop-in stove with a lower countertop. 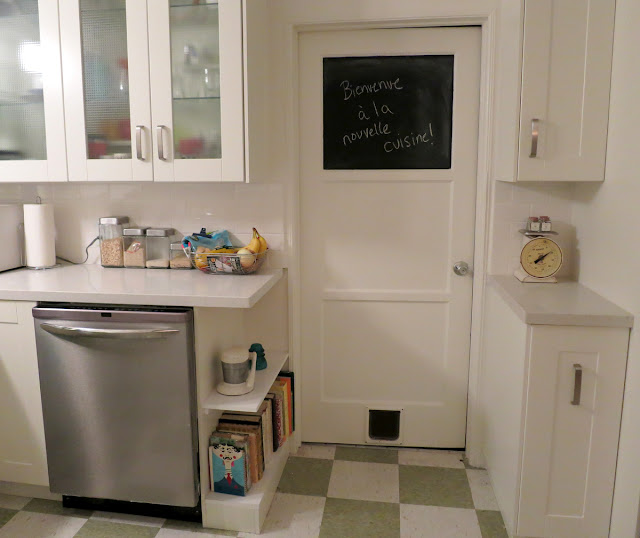 2. The contractor built some shelves since the space next to the dishwaster was too narrow for anything else. They're perfect for cookbooks. And the door now opens into the downstairs bedroom, instead of taking up room in the kitchen. I painted the window with blackboard paint. On the right is a pull-out trash can, which isn't perfect, since the door is noisy and it doesn't have a lid, but at least it's hidden. Think about where your trash will go before ordering cabinets.
But what else is missing from this picture? My beloved steel microwave shelf over the dishwasher. The lesson here: if the contractor tries to tell you something won't work but you're pretty sure you really want it, don't agree until every option has been explored. The upshot is that there's really no good place to put the microwave now.
3. Appliances, continued: Figure out where all your small appliances will go before you reconfigure the electrical outlets and cabinets. Add extra outlets even if you don't think you'll need them. Although I gained an outlet in the remodel, somehow I still lost some of the flexibility in placement of the coffeemaker and toaster oven.
4. How did this three-week job end up taking almost five weeks? Because we didn't find a stone countertop company until after the cabinets were installed. Ikea and Home Depot turned out to be too expensive, and my contractor's usual guy was too. By the time we got better estimates and waited for the stone to be cut, we lost an entire frustrating, sink-less week or more when nothing could be accomplished. So line up the countertop folks BEFORE the cabinets go in.
5. Of course, it will cost more than you think. In our case, it turned out we had to re-wire the entire house, even though we didn't add any extra appliances. But the wires in the walls we so old they just disintegrated when they started working on them. One way to save money, if you're using Ikea cabinets, is to hold out for one of their 20% off cabinet sales. It's hard to know when they are, but of course this year, it was around March 1, just a few weeks after I bought mine. Oh well.
But all in all, I'm very happy with my new kitchen, and a month is really not bad. Just one more tip: Don't store your spices in the garage. I'll leave why that isn't a good idea to the imagination.

Patty--I am wowed by your kitchen. Five weeks may seem a long time to you, but it beats the five months we spent kitchenless on Mt. Washington (after a time, I sublet a room downtown near my office and feasted on the nightly free hot buffet at the Bar at The Biltmore). One tip I did glean from the collective experience was to attempt purchase of countertops directly from the quarry/wholesaler. Most quarries are happy to sell retail to customers who are prepared with measurements and delivery/installation is often free if the area is prepped first by you. Altogether, you have done a mighty fine job.

thank you for that!
it looks great - love the cutout!

Always looking for these kinds of great content and information over the internet. Really very appreciating. Keep it up Thanks

Hi,
Green panel max provide so many type of broad for all type of wooden work MDF Supplier | Veneered MDF

Anonymous said...
This comment has been removed by a blog administrator.
5:32 AM

I just started my remodel and it looks like I picked many of the same products/finishes as you: inexpensive white subway tile and Ikea cabinets, Caesarstone (I picked Frosty Carrina) , keeping my floor and appliances. Do you mind if I ask what pull ou trash can you bought? I am actually doing all of this remotely (kitchen is in LA, I'm in Guam), and would appreciate any recommendation.

Hi, I just got the Ikea pull-out cabinet and a trash can from Home Depot. I only have space for a 12" cabinet but if you have a wider one, you can fit both a trash and a recyling can.

Thanks for the great tips. I want to put my stove beneath an arched pass through. I was hoping you could tell me or show a pic of exhaust fan/hood you used above your stove.