With the massive popularity of Bottega Louie, it was inevitable that someone else would try a multi-purpose spot for Downtown residents and visitors to shop, drink, snack, dine and of course snarf macarons. So next door to Cole's, Artisan House has risen at the corner of Sixth and Main with a similar mission but look and menu all its own. Artisan House co-founder Raphael Javaheri is in the textile business and has never owned a restaurant, though he's a big foodie happy to share his favorite sushi haunts. The Pacific Electric lofts building has a historically appropriate antique-y vibe that echoes the Bradbury building with tall banks of windows, lots of brick and ironwork and recycled wood floors and bar. On one side is a deli-market with a full menu of sandwiches and salads, and a few baked goods like Paulette Macarons. Like L'Epicerie in Culver City, the gourmet market has a small produce area, a good selection of beers, artisanal sodas, wines and liquors, and a selected smattering of cheeses, snacks and staples. Javaheri says the market will soon carry Artisan House-branded olive oils and other handmade products, and he wants to work with local and sustainable purveyors as much as possible. 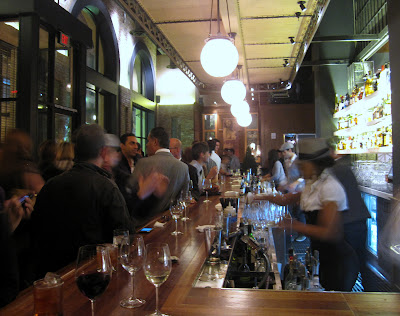 On the other side is a full bar and restaurant serving breakfast, lunch and dinner (the bar is conveniently open from 11:30 am to 2 am every day). The opening party aps of Sicilian tuna tartare, smoked salmon and spicy fried shrimp with aoili were mighty tasty, but a verdict on the full menu will have to wait for a full meal. Chef Jason Ryczek plans California-Mediterranean farmer's market-inspired dishes like flatbreads, beet salad, grilled romaine, albacore confit sandwiches and house-made duck prosciutto. 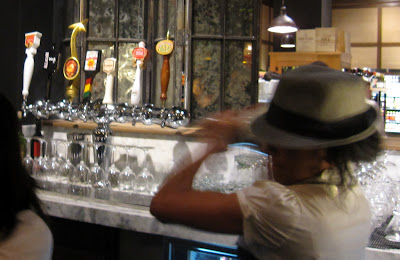 It's a super-competitive block for mixology -- La Perla, the Varnish, Cole's and the Association are just steps away. So former Bazaar bartender Elden McFeron III promises molecular-style cocktails, while beer taps at the opening included Maudite, Anchor Steam, Stella, Racer 5, Chimay and a couple others. With its all-day offerings, Artisan House is sure to attract a wide mix of Downtowners.
Artisan House
600 S. Main St.
Los Angeles