Six delicieux ways to get a taste of Paris


So, I've been working in France for the past two weeks -- mostly sequestered in an office working on Variety's daily Cannes Film Festival issues, with an endless supply of pre-packaged madeleines and the occasional publicist gift of macarons from Cannes' wonderful Jean-Luc Pelé.
Before the festival, I spent a weekend in Paris. I hadn't been to Cannes in 10 years, or to Paris in more than 15, so I had never experienced France with Euros, automatic metro and train ticket machines,
Starbucks or Ben and Jerry's. Another surprise was my formerly sleepy old neighborhood, the 11th arrondissement, which now has the highest concentration of hipster bars and restaurants of just about anywhere.
If you're going to Paris, here's a few recommended stops. 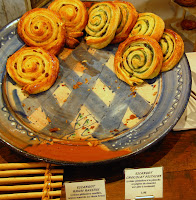 1) Du Pain et des Idees -- This bakery comes highly recommended by David Leibovitz, and since I prefer bread to pastries, macarons and chocolates, I made it a priority. I was picking up snacks for my picnic on the TGV train to Cannes, and the chocolate pistachio snail made an astoundingly good breakfast, while the hearty, slightly sour pain Pagnol, hacked off a huge loaf, was probably one of the single best breads I've ever tasted.
2) If you're going to the above bakery, grab an escargot or chausson aux pommes and head down the block to Chez Prune for a coffee. The coffee itself isn't that special, but in terms of being at the epicenter of things, it's roughly equivalent to Intelligentsia. The view of the Canal St. Martin is quite a bit more lovely than Sunset Blvd., however. 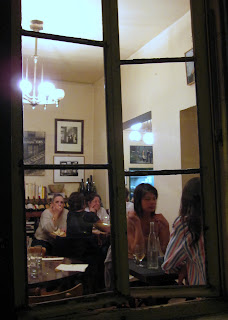 3) Au Baratin seems to be mentioned in every New York Times article about Paris (though not as many as Le Chateaubriand, which I missed even though I was staying on practically the same block). The cozy wine bar-cum-bistro is on a steep and atmospheric Belleville street, the owner is gruff but has great taste in wines, and the food is spot-on. If you're looking for somewhere with good wine, a very French menu but with a few contemporary touches, and prices that aren't sky-high, Le Baratin is a good choice.

My marinated sardines and white asparagus were light and fresh, and the owner recommended a terrific wine to go with it.

4) The Marche Place d'Aligre (every day except Monday) combines aisles of produce and a small flea market outdoors with a covered market featuring some super high-quality food stalls. I helped a Russian family try their first oysters ever at the seafood stall, checked out the artisanal French and Belgian beers at Le Cave a Biere, marvelled at one of the more amazing cheese counters, and generally longed for the chance to cook a feast based on the products of this market. Several cute cafes and bakeries surround the market, where it's easy to spend a whole morning even if you're not cooking a meal anytime soon.
5) Several more gourmet underground dinners in Paris seem to be fairly sporadic, not to mention pricey. But former Texan Jim Haynes runs what must be the longest-running underground dinner anywhere. For 34 years he's been welcoming visitors -- lots of Canadian and American tourists, and a smattering of Parisians and other visitors -- to his loft near Montparnasse, which features a rare Parisian backyard. For a 25 euro contribution, there's all the beer or boxed wine you can drink, a salad, a rustic main course like beef bourguignon and dessert. The visitors are mostly of the knowledgeable and interesting variety -- I met two Vancouver editors and food bloggers, a guy who works with Mike White and an Irish TV news producer, everyone friendly and eager to trade restaurant and travel tips. 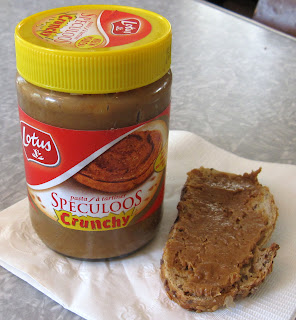 6) Don't forget to pick up a jar of Speculoos spread to bring home. What are speculoos? The strangely-named cookies are delicate Belgian ginger biscuits that for some reason are all the rage in France. They form the base of tiramisu, flavor gelato and crepes, and are even made into a popular spread that looks like peanut butter but tastes like crushed, spreadable cookies.
at 4:21 PM

Totally inspiring, glad you're back!

Sounds like a great homecoming. The market would be a priority for me after reading your post.

Yum! I'm going to have to live vicariously through you, Pat. I'm dying to visit Paris. Maybe when CC is older and can enjoy it with me. :)