What's on the Oscar menu? Cupcakes and celery risotto.

While EatingLA was at the Berlin Film Festival, contributor Kathy A. McDonald was checking out what Oscar-goers will be eating on Feb. 26. What's on your Oscar menu this year? Tea and crumpets for "King's Speech," But what about "Social Network"? Certainly not Salted Red Bull Granita! Anyway, if you're at the Governor's Ball, here's what you're getting.
Starving after four hours of the annual kudos-thon, Oscar-goers can look forward to a movie-inspired dinner prepped by Wolfgang Puck and his culinary team, including executive pastry chef Sherry Yard and chef partner Matt Bencivenga.
The media got a preview  of the elaborate menu at the Kodak Ballroom, event design by Cheryl Cecchetto and flowers from Mark's Garden. More than 1,500 are expected at the black tie event that doesn't go too overboard with the Oscar theme.
Everyone gets an Oscar, promises Puck although they may only be the chocolate, 24 karat gold-dusted version.
Starters include an elaborate seafood bar (400 lobsters on order) and Oscar-shaped smoked salmon (60 whole salmon will be smoked) served on flatbread with caviar and crème fraiche. "The King's Speech" was Puck's inspiration (although he hasn't seen the movie) for the main course of pan-roasted Dover sole served with heirloom cherry tomatoes and on the side, vegetable risotto paella in its own little mini-cauldron (inspired by "The Black Swan," says Puck). 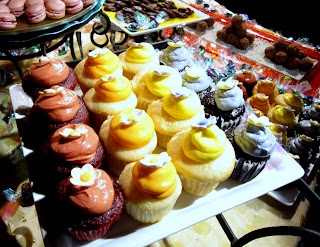 Best actress nominee and reported vegetarian Natalie Portman needn't worry about dinner. Although it¹s heavy on seafood items (Puck's tuna tartare in mini-cones are perennial favorites), Puck promises that the very pretty trio of salads can be prepared sans meat (vegetarians will have to pass on the pricey jamon Iberico). Celery risotto with black truffles is also available as is a plate of specially prepared vegetables including seared Belgian endive topped with Indian spices.
The centerpiece during the desert course will be a larger baked chocolate Oscar topping an array of colorful macarons. Mini-cupcakes will make an appearance too, with all to be washed down by more than 1,000 bottles of vintage Moet Chandon Imperial champagne.
--Kathy A. McDonald

mmm that looks a lot better than my menu for oscar day eats:

Natalie Portman is a vegan.

Wow! at the seafood bar.