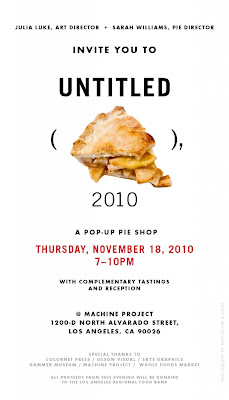 I can't tell you how relieved I am that the tide seems to be turning from cupcakes to pie, which I adore much more. It's been said before, but 2011 is definitely shaping up to be the year of pie.
Here's a few slices of the pie scene:
On Thursday, Machine Project hosts a pop-up pie shop benefiting the L.A. Regional Food Bank. Julia Luke is art director, Sarah Williams is pie director. Yes, pie these days comes complete with art directors.
***
Another commentary on the intersection of pie and art is Pielab, an Alabama community project born out of the art scene, recently profiled in the New York Times magazine.
***
Simple Things, opening soon at 8310 West Third St., specializes in pie and sandwiches. The chef is Carrie Cusack, who's been bringing her Frankie & Tiny pies to the Silver Lake Farmer's Market and elsewhere for the past year.
***
And some of my favorite stops at the recent Artisanal L.A. were the pie companies, including:
I Heart Pies, from Emily Cofrancesco, with an adorable octopus logo and pies ranging from peanut butter s'mores to maple walnut to strawberry fig.
All Jarred Up pie in a jar company, which ships apple, grape, caramel, banana and more pies for around $6 - $10 each through Etsy.
Tartist.LA, which incorporates touches like pomegranate glaze on a fig tart or Persian honey-vinegar glaze on an apple tart for exquisitely-presented tarts (which after all are just fancy pies).
Where's your favorite pie stop?
at 9:52 AM

Can anyone recommend a source for mincemeat pie ... or mincemeat tart, or mince anything?

(Other than Marie Callender's, which is always either just out or the counterperson's never heard of it.)