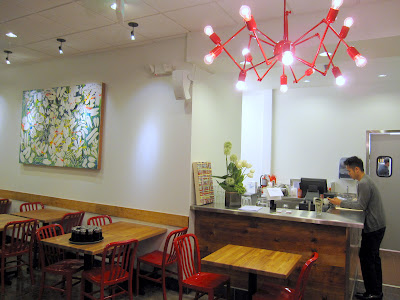 It's only fitting that my first meal at Echo Park's new Xoia started with pho tacos. The restaurant is owned by longtime Echo Park residents Jose Sarinana and Thien Ho, and the food is mostly homestyle Vietnamese, influenced by Ho's heritage fro the city of Hoi An. This article from the Eastsider explains how the restaurant came about. Just a few years ago, I never would have believed that the Silver Lake-Atwater area would giver near-Eastsiders a choice of Indochine, Viet Noodle Bar, Gingergrass and Pho Cafe, and now Echo Park has its own version with just a touch of Latin influence -- at least in the tacos.
Since the launch of Kogi BBQ truck, pretty much every cuisine serves tacos, and these juicy tacos made with pho beef just needed a touch of soy sauce and housemade salsa to bring them to life.
Xoia is still in soft-opening stage, with a limited menu and dinner service only. But in a few weeks, more menu items will be added and lunch will kick off too. The former paint store is bright and modern, decorated with Sarinana's abstract paintings, with a small patio that's nicely enclosed so that diners don't have to sit right on the Sunset Blvd. sidewalk. A clutch of bloggers were invited Monday to try some signature dishes, and I liked both the tacos and the beef pho. With a heartier, more flavorful broth than is sometimes found in the nouveau Vietnamese spots and a jumbo helping of noodles, this is a solid bowl of pho for $8.50.
The menu also has spring rolls, vegetarian pho, banh mi at around $6.50, chicken curry and an intriguing noodle dish, Mi quang, with thick rice noodles, shrimp, pork, mint and sesame cracker chips. There's no liquor license at the moment, though they may apply for one down the line.
Xoia
1801 Sunset Blvd.
Echo Park 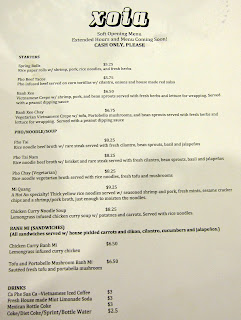 of course, you know the things that popped out for me are Pho Chay and Banh Xeo Chay! Now I gotta try!

I never taste any Vietnamese foods before. I was looking at the picture of food in your blog and it looks good. I wish I can try that one.

The tacos look delicious and the menu looks great! I must try!

I didn't realize that the Vietnamese people ate "tacos", or is that a SW addition?