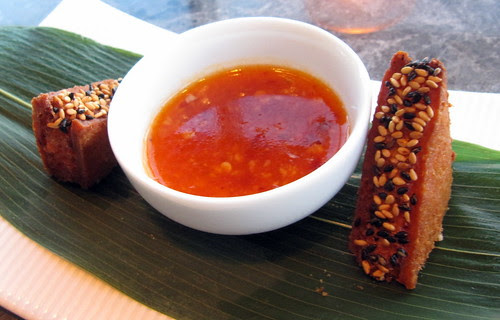 Shrimp toast: WP24 or your neighborhood Thai restaurant? WP24 for sure -- no one else uses spot prawns, and this is a Thai delicacy that isn't as popular as it once was.

WP24, Wolfgang Puck's latest restaurant on the 24th floor of the new Ritz-Carlton Hotel next to Downtown's L.A. Live, has one of the best views in town, and one of the few places with food to match the view. I was invited to try WP24 Friday and thought the food was fun, accessible and excellently-prepared, though I'm more used to ground-level dim sum than dumplings priced as high as the view.
The room is rather somber, with dark leather chairs tones of brown and gray enlivened by rectangular punched metal light fixtures meant to mirror the lighted skyscrapers outside.
Service is on the formal side -- appropriate for the setting, but it would be even more relaxing if the servers were a touch more laid-back and friendly. Personally, I liked the strange covers of the Cure and David Bowie that played all evening, but they were probably a little loud for the older businessman crowd that made up about half the diners. The other half were couples of all ages celebrating birthdays or on dates-with-a-view, and a younger after-work crowd in the large lounge area.
People accustomed to dining in the San Gabriel Valley's dim sum parlors and noodle shops will probably wonder why anyone would pay far more just for a view of the Staples Center, but they're missing the point. So we'll run down the dishes we had and decide whether they're worth trying at WP24. Let me know if you know of anyplace to get worthy similar dishes. 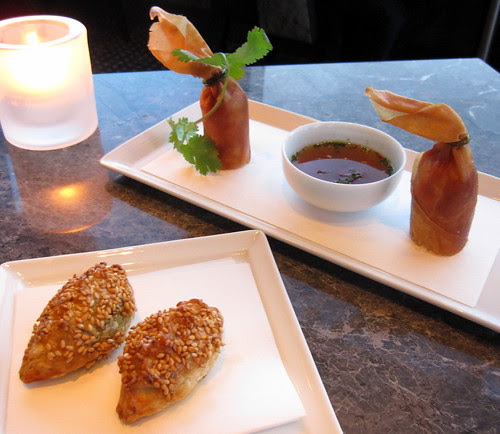 Here were some highlights of the tasting menu we were served -- everything is on either the regular menu or the lounge menu, where a full sushi menu is also available.
At top are lobster-stuffed spring rolls, and the sesame-encrusted dumplings are filled with spicy curried beef with just the right heat level. While these dumplings resemble something from a top dim sum spot, they're even better for the most part -- even Sea Harbour doesn't use spot prawns and organic chicken.
WP24 or Sea Harbour?: WP24's appetizers are worth the splurge once in a while.

Pork belly buns with Chinese honey-garlic glaze are high on the list of decadent, rich, sweet, doughy, salty things you can put in your mouth. You could sit in the bar, order these and a few more dim sum along with the Dragon's Fire tequila-jalapeno cocktail while gazing at the skyline, and be a happy person.
After that came duck liver buns -- also decadent, but maybe even too rich, whereas the pork belly was just right.
WP24 or SGV? I've never had the famous Momofuku pork belly buns or the one at Gorbals in L.A., but Flying Pig's were nothing special, so WP24 takes this round. 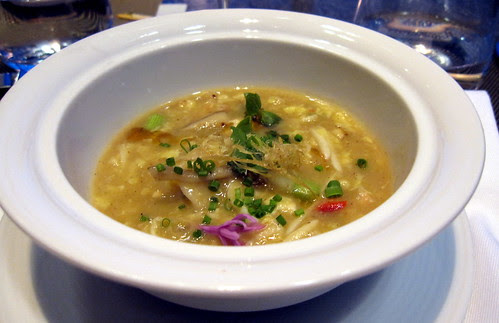 Hot and sour soup with King crab, roasted corn and sweet prawn wontons was perhaps the least successful dish for me -- there was just a little too much going on, and the corn made the dish sweet instead of bracingly vinegary. I wouldn't turn it down as a light supper on its own, but it's a little heavy for a multi-course dinner.
WP24 or SGV: Stick with 101 Noodle.

Then came a parade of adorable petite dim sum, with a perfect har gow and several more well-balanced dumplings like lobster-shrimp sui mai and dan dan dumpling with organic chicken. Next up was a square of excellent crispy suckling pig. Still, having this many appetizer-type dishes meant a lot of hoisin and Thai chili-type sauces, which means many flavors lean towards the sweet side -- a common occurrence in pan-Asian restaurants, but one that can be remedied with careful ordering. For two, I'd recommend a rich appetizer, then a whole fish, lobster or beef entree, a noodle dish and some vegetables, for example.
The other dim sum were quite nice, but not exceedingly better than, say, King Hua or Elite. 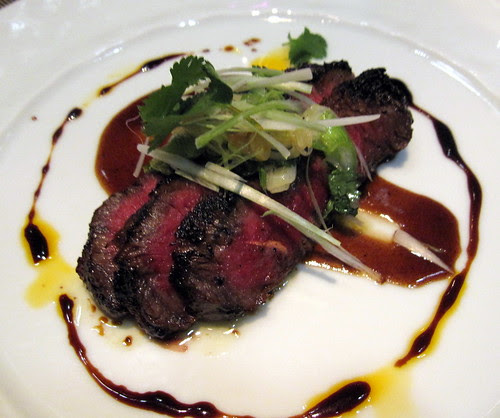 Though other diners were tucking into impressive lobster and whole fish presentations, we were ready for a break from seafood and went with sliced Szechuan style Kobe steak from Snake River Farms, Idaho, with smoked chili-shallot sauce and chili oil. At $46, this is certainly an indulgence, but since I could easily keep my beef consumption to a few carne asada tacos a month and Kobe steak once a year or so, it would be worth it to me. This buttery steak had a mild, rich flavor, and my tasting portion was just right.
With the beef, we had a side of Hong Kong noodles ($12), which are very thin Chow Mein noodles, expertly stir-fried with wild field mushrooms. It was every bit as good as some noodle dishes found in the SGV, and with much higher-quality ingredients.
WP24 or a "real" Asian restaurant? I've never had beef this good at a Chinese or Japanese restaurant, so I'll go with WP24. 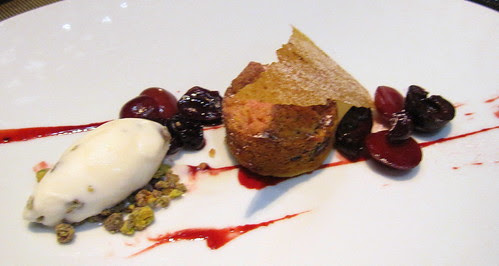 Dessert wasn't on the menu, although I enjoyed the Calamansi Vacherin at the opening party. Our dessert was yogurt-pistachio ice cream paired with a fragrant pistachio cake and fresh cherries. We weren't convinced at first, but I've been craving that ice cream, made with candied pistachios, ever since, and all the flavors paired perfectly.
WP24 or elsewhere?: I happen to like real Asian desserts just fine, but WP24's are Western-style with Asian accents. They stand just fine on their own, so I'll vote for WP24 here.

The tally? It looks like WP24 took every round except the soup and the assorted dim sum. If you're after a view, want to impress out of town guests or are on an expense account, WP24 is well worth checking out. If you're not, hit the bar and try the pork buns anyway.

Hilarious! And I just cried a bit. Too bad we can only afford SGV mortgage, not LA Live mortgage...

What are the prices like? I didn't see any on the menu.....thanks.

Very cool idea for a post, and fun execution. Looking forward to trying WP24, though it looks like there's at least a little overlap with Chinois on Main, which I tried again recently. When I go, I'll stick with the WP24 exclusives.

The pork belly buns look so good. I will have to make some soon.