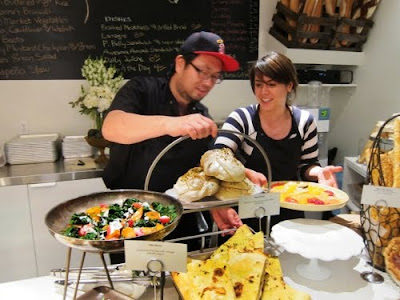 Open for just a few days, Forage on Sunset is already going strong. We're still trying to fit in a visit, but in the meantime, Gregory from Typefiend and Apartment Therapy visited on the very first day.
Forage is inviting diners to bring in their own fruits and vegetables and they'll try to come up with a dish to make out of it. Forage is now on Twitter and quickly amassing fans on Facebook, too.

Meanwhile, the old Andiamo space on Sunset is turning into a Silver Lake outpost of Cowboys and Turbans: Street Food from India, the Indian/taco place on Wilshire, says the EastsiderLA. Here's EatingLA's report from Cowboys and Turban's early days on Wilshire last March. Cowboys owner Baba is no stranger to the area -- he opened Electric Lotus on Vermont nearly 20 years ago, which was the first Indian restaurant in the area, if memory serves.
at 1:51 PM

My wife and I were the inaugural customers for Cowboys & Turbans. We were "this close" to walking into Gobi but our curiosity got the best of us. The Masala burrito rocks. Good luck Baba!

I was at Forage the other night and our food was great. Really great concept. I'll be going back soon.

I went here last night..niman ranch meatballs on grilled bread, scalloped potatoes and bread pudding with chocolate. Everything was beyond delicious...this is my new obsession. (I'd had a REALLY bad day..hence the comfort-food fest)