Biking the L.A. River, but with more food 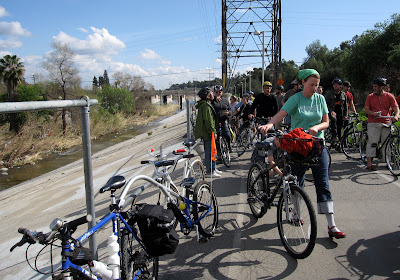 Today's Urban Explorations bike tour of the L.A. river was a great overview of the river and its ecosystem. We learned that steelhead trout used to live in the river until the 1940s and that people still fish for carp, catfish and tilapia that have been introduced into the river. 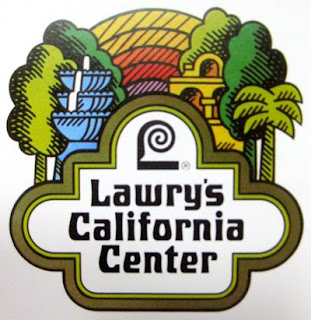 Amazingly, they tested low for contamination, but the biologist on the tour said she wouldn't personally advise eating fish from the river. The only thing missing from this tour? Food.
Here's how to experience the L.A. River bike trail, but with more eating stops:
You could start, like we did, from the L.A. River Center, which used to be Lawry's California Center. It's worth a look around the spacious gardens to appreciate how pleasant it must have been to drink margaritas in the garden with strolling mariachis. You can follow the river the whole way, or parallel the river along Blake St. for a while, then head back to the river. You'll pass under Highway 2, the Fletcher bridge and the Los Feliz footbridge. Of course you could exit here and hit up plenty of places in Atwater like the Los Feliz Cafe (formerly Eatz), Hugo's Tacos, the Sunday Atwater farmer's market, or Viet Noodle. 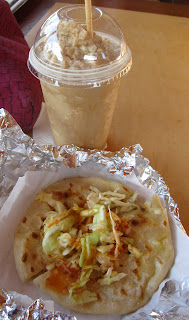 Or you could turn around, head back along the L.A. river and stop at Franky & Johnny's Fisherman's Seafood Outlet, on Riverside Dr. near Eads St., where they're often grilling up some fish on the patio. Returning via Figueroa, some cyclists headed to El Atacor for the famous potato tacos. But I had pupusas on the brain, so I stopped at Maria's for a loroco pupusa and took it across the street to Antigua Coffeehouse for an ice-blended caramel coffee. It was a perfect way to refuel after the ride, but I'm still planning to hit Metro Balderas on my next Highland Park ride. Any other eating suggestions nearby the L.A. River bike path?
at 4:58 PM

Looks like a fun ride, and a good day for it. Antigua is a good addition to the area, with fresh-roasted coffee from the owner's Guatemala coffee plantation. I just checked out Village Bakery yesterday, near the river in Atwater. Some of the pastries looked a little better than they tasted, but the strata (savory bread pudding) with bacon and apple was a winner.

We used to go to that Lawry's after church when we were kids! It was, indeed, wonderful and unlike any of the other Lawry's that exist now. Le sigh.

Going to the old Lawry's was always a fun experience. Because my then employer did a lot of business downtown, we'd stop there for lunch, and even for special events.

This was my first job after graduating university, so I always found both the restaurant and its location enjoyable, as at that time, there was no shortage in our budget to eat and drink as much as we wanted.