Top Chef #11: Strip Around the World - Save our Souls! 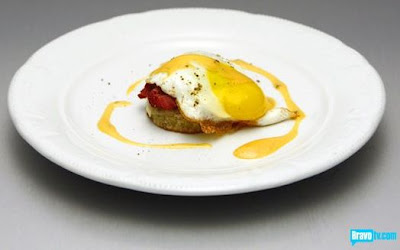 It's down to a more manageable six chefs and the personalities have been getting more distinct, yet somehow Robin is still in the kitchen.
For the Quickfire Challenge, the chefs have to deliver breakfast in bed to saucy British chef/author Nigella Lawson. When they reveal that Gordon Ramsay named a turkey after her, my daughter falls off the couch laughing. She's legit!
Who doesn't like breakfast? Even the worst of these dishes look pretty good.
I'd eat that: Love Robin's blintzes! But Padma and Nigella, luxuriating in separate beds, pronounce them too one-note. Michael Voltaggio gets over-elaborate with a Cuban-inspired dish involving crispy rice, egg, bacon bits and banana. Still, it looks pretty tasty.
They still hate Robin: "I'd rather you'd just be gone right now!" Michael says to Robin while manuevering around the kitchen.
Only Jennifer's dish -- Shit on a shingle - looks kinda nasty. Why, Jennifer, why? Even calling it chipped beef isn't gonna help.
The winner: Eli has the clever idea to combine a Reuben sandwich with eggs Benedict, getting his recipe in the Top Chef Quickfire cookbook.

Elimination round: Each chef has to base a tasting for 250 people around a Vegas hotel. That sounds like an annoying task, and indeed, almost everything goes wrong in this round.
Robin gets The Mirage, where the Dale Chihuly glass ceiling inspires her to make panna cotta with sugar stained glass, a new dish for her. Robin stupidly proclaims, "I keep doing things I haven't done before!" The panna cotta is as solid as Nigella's rack, instead of soft like a courtesan's thigh, as the lusty Nigella put it.
Jennifer is completely discombobulated by the smoke and Medieval kitchery of The Excalibur. She has no clue what to do, and the judges are left riffing on whether her steak represents the sword or the stone, because it's so tough. "It's more Spamalot than Camelot," says Nigella. Who writes this stuff? Again, Jennifer appears sulky and ready to melt from exhaustion.
He should have lost: Eli is like an elf in a candy store at bright, noisy Circus Circus -- where he inexplicably decides on caramel apple peanut soup with popcorn and raspberry froth. "Like most people who go to Vegas, he has gambled and lost," says Padma. "It wasn't a dish, it was a fiasco," says Nigella.
The real loser: Finally, it's goodbye to cancer-riddled, wizened, incompetent, babbling Robin, despite the fact that they seemed to hate Eli's gritty peanut soup even more than her rubbery panna cotta. In her tearful parting words, Robin says she feels like she lost her way not cooking her signature comfort food.
The winner: Michael Voltaggio draws New York, New York and decides on boneless chicken wings with blue cheese -- but isn't that more upstate New York? The judges laud him for not making his food so effeminate as it usually is. Just before the judging, he looks shell-shocked -- he didn't even manage a fight with his brother this time. But he wins a bottle of wine -- just a magnum, although it should have been a more generous Nebuchadnezzar, and a weekend in Napa.
Nothing too surprising this week -- the bad cooks go home, and the good cooks stay, although they could smile once in a while.
Next week: Thomas Keller appears, right in time for the opening of Bouchon Beverly Hills. Who says this isn't an L.A. show?
Vocab lesson: Escabeche: poached fish marinated in an acidic mixture, usually served cold and similar to ceviche
S.O.S.: Shit on a shingle or creamed chipped beef, originated in the Army around WWII
at 9:24 PM

Eli's was worse. They should just come clean and admit they judge by season-long cumulative effort at this point.

While I don't know if S.O.S. was the right choice for the quickfire - have you ever had it? It's, oddly enough, actually quite good.

But maybe I'm saying that cuz I'm from the midwest : )

Eli's may have been worse, but panna cotta is cream, sugar, and gelatin. If Robin can't get that right, is there really any point in keeping her?

I'm so happy Robin was finally let go. BTW, they had to serve 175 people, Robin's hotel was The Bellagio and "It's more Spamalot than Camelot" was said by Toby Young.

Eli's was a disaster. it could have easily been either, but in spite of the stained glass issue, she screwed up a VERY basic dish and left off the element that inspired her. The time had clearly come.

I have a bigger problem with the wrong Voltaggio brother winning. The weird blue cheese chip thing Toby hated. I think Bryan had a far superior dish. For that matter, Kevin did too.

Speaking of Kevin, did you get the drift from the preview of the next episode that Michael doesn't think much of Kevin's cooking.

Michael is a total d-head. That said, I think he's a great chef and I can't wait to try his cooking once the Langham reopens.

I'm still pulling for Jen to pick herself out of the weeds and stage a comeback.

Poor Jen, seems like the stress that these type of shows purposely induce is getting to her.
I am rooting for Michael, he is a homespun, authentic, genuine chef with grand skill.
The Voltaggio brothers, though obviously skilled, annoy the hell out of me.

eek! I meant I was rooting for Kevin!

Robin's assignment was the Bellagio, not the Mirage. Kevin had the Mirage.

"Like most people who go to Vegas, he has gambled and lost," says Padma.

Eli easily could have lost, but as has been noted, it was long past Robin's time to go.

And yea, SOS can be great, though Jen should have stuck with "chipped beef". She's been her own worst enemy lately.

Finally, does Kevin ever trim his beard?

The Langham is open. I just had dinner there last week and it was surprisingly amazing!