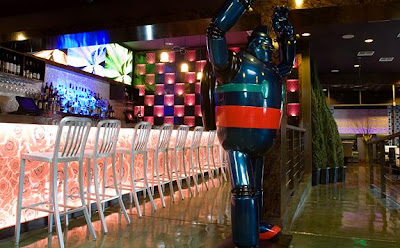 UrbanDaddy has all the info and a not-surprisingly dubious tone announcing the opening of Tangier Korean BBQ of Tokyo in Los Feliz. Wait, let's get this straight -- the formerly Moroccan-themed nightclub Tangier has kept its name, but turned into a Korean BBQ restaurant which is actually from Tokyo? Whatever, there's a robot and sake in the bar, and it's not like there's anywhere else to get Korean barbecue in Los Feliz.
***
What's going on at Town & Country Bakery on Sunset? It's "closed for remodeling" and has been sold, but no word yet of what's going in there. It can only be an improvement, since I never ran into too many fans of Town & Country.
A few doors down at 3819 Sunset, the Spice Station is "opening soon," selling salts, peppers and spices from around the world.
***
CubeLA is branching out from La Brea and will open its Downtown housewares and gourmet items factory Cube Marketplace one Saturday a week starting Feb. 13, 2010. Shoppers for imported linens, table accessories and garden ware will be treated to Prosecco and Cube pastries, and the space will also host cooking classes and gardening classes from Marta Teegan of Homegrown Los Angeles. The space is at 545 S. Central and will be open Feb. 13, March 13, April 17, May 15 and June 12 from 10 am-4 pm.
at 10:16 AM

I drove by Tangier today and was similarly puzzled by the transformation. Is the robot enough to distract diners?

Town & Country was in some prime real estate. Hopefully it won't be another shoe store.

Word in the 'hood is that Town & Country was not allowed to renew their lease due to a technicality in their agreement with the landlord and they got kicked out.

While I have no idea regarding the concept, I gather Yong Kim is the buyer of the business.

I live a couple blocks away and saw it on Thrillist and I drove by. Odd that they kept the name. Identity crisis or laziness to change the name. Whatever it is, it doesn't matter. It's the food that matters. I'm trying it this weekend. I agree - there's no KBBQ places in Los Feliz or Silverlake. Besides, who could resist a giant robot?

carter, is your comment regarding town and country or
tangier?