Top chef episode #10: Meat Natalie - Flavors that are big in your mouth 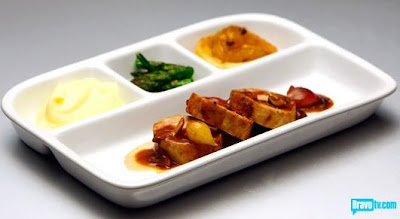 I'd eat that: Bryan's meatloaf looks like a real TV dinner, only better, inspired by 1950s-set "MASH."

It's a smaller, tighter group tonight, and the chefs are chastened by how few of them remain -- as well as stunned that somehow Robin is still among their ranks.
For the Quickfire challenge, the chefs draw classic TV shows which are meant to inspire TV dinner menus. It's a fun idea, but most don't have a clue how to interpret it.
Not surprisingly, Earth mother Robin wasn't allowed to watch TV as a kid, so she's never seen "Sesame Street." Her egg-yolk embedded in a mini-burger does have a childlike playfulness, but the judges pronounce it tough and uninspired.
Jennifer, who drew "The Flintstones," lights up with a rare smile when she talks about BamBam pulling Pebbles around by her hair -- does she harbor a secret desire to be dominated? When Jennifer's cooking, she runs around the kitchen like a frantic pony.
The winner: Kevin's meatballs are at least consistent with "The Sopranos," and the judges love his pear dessert. 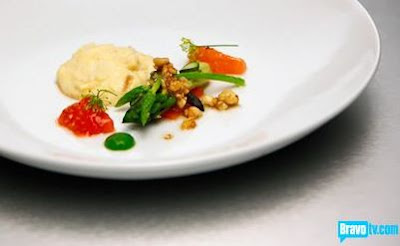 Michael's delicate asparagus salad is better-looking than the winning dish.

Elimination round: The chefs are excited to cook at Tom Colicchio's Craftsteak and see all the great cuts of beef. But Natalie Portman appears and announces that she's a real foodie, but "The one thing is, I'm vegetarian." Crunch Robin is happy, as is Kevin, who usually gives up meat for Lent, or when the Hobbits haven't killed any Orcs lately. Jennifer is a very carnivorous girl, so she's sulking as usual.
Doing a slow fade: Jennifer is really off her game tonight. Tomato coins, what the hell? Her dish looks like the random stuff I pulled out of my garden in the dark the other night and threw on some pasta.
Runner-up: Michael's asparagus salad looks a little stingy on the plate and is burdened by disconcerting lumps of banana in the polenta. But his dish makes Natalie smile and laugh, "it made Natalie giggle like schoolgirl."
Natalie doesn't look comfortable as a judge -- she gives a tight little smile when one of the other judges slams a chef, although by the end she's dishing with the best of them, and tittering when all the girls start carrying on about a flavor that starts "growing like a little prick" in your mouth.
I'd eat that: Kevin's dish has a meaty, substantial feel, with hen of the woods mushrooms and smoked kale -- It's a "mouthful of flavor," so he's the winner.
The loser: "Mike exudes arrogance," a judge says -- no, duh! Finally, the cocky Mike must leave. He has the nerve to say on his way out that Robin should have gone instead of him -- what a douche. Mike, don't let the door hit you where the good lord split you!
Let's hope Jennifer can get back in the saddle for next week's episode.

I know Mike V is talented but he is WAY too arrogant.

Happy the even more arrogant other Mike left!

Love Bryan and Kevin - great chefs with great manners as well. And I really hope Jen can pull it together.

And I guess they were having a hard time changing gears after thinking steak all night but I was confused by the lack of proteins and, what, no dairy?