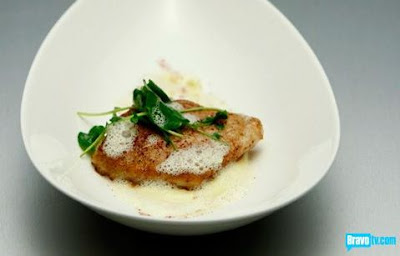 I have to say right up front that this was not the most scintillating episode of Top Chef. Maybe the tone for the episode was set by poor Jennifer, who was really sick the whole time. Maybe it was as close as she could get to last episode's play-the-cancer-card routine. But without some of the, shall we say, larger personalities, it seems like it's down to the real chefs now, who are grim, humorless and determined to win.
Quickfire challenge: TV chef Tyler Florence was the guest judge for the quickfire challenge, where chefs had to cook dishes combining three words selected on a slot machine. My daughter thought there was something hilarious about the Adventurous Crunchy Asian selection, and that's certainly the one I'd chose to cook. But several of the chefs, especially whiny, egotistical Mike said they never cook Asian food. How is that even possible?
Not too bright: Robin seems to think curry powder belongs in Middle Eastern food.
I'd eat that: I thought Ashley's feta pudding and sumac-crusted halibut (above) looked good despite the no cheese-with-fish rule.

If you need a little more Ashley, check out her Top Chef photo gallery here.
The winner: Kevin, who also says he doesn't know Asian cooking, does a nice simple chargrilled pork with Vietnamese herb salad, and chooses the $15,000 instead of immunity.
Elimination round: Nancy Silverton and Govind Armstrong are among the chefs from Macy's Culinary Council who will judge the dinner party episode.
This challenge is tricky, because working in pairs seems to bring out the worst in the chefs. Because Mike can't stop bad-mouthing Robin, inevitably he must team up with her, and says he's "livid." Way to be gracious, Mike!
Michael Voltaggio, who has likely eaten at Mozza many times, gets Silverton's bag of food, and decides to do a ravioli-topped halibut, thinking she'll appreciate the pasta.
Mike gets the Takashi Yagihashi's bag, so he's stressed that he has to deal not only with Robin but with the likes of dashi and ponzu.
Stupid idea: As soon as Ashley and Eli announce they're making grilled spot prawns over gnocchi, Tom Colicchio looks suspicious. The finished dish is beautiful though, with a beet creme fraiche sauce providing a vibrant backdrop.
Those are some tense boys: Both Michael and Bryan Voltaggio look tense and miserable, as if their life depends on this challenge. When the electricity goes out while Michael's cooking his halibut, he looks like he's going to cry. Bryan also seems pretty tightly wound. Note to self: Do not apprentice in their kitchens. 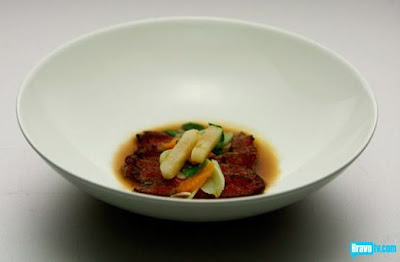 The winner: Despite being sick, Jennifer and Kevin win for their Korean Kobe beef dish (above), snagging $10,000 Macy's gift cards. Maybe next week's contestant should arrange to chop off an arm or something for an advantage.
The loser: Indeed, the halibut is badly cooked because of the electricity problem, but even worse was the idea to put a frozen egg yolk in the ravioli, which seems to gross out Colicchio.
But even worse was Ashley and Eli's gnocchi and prawns dish, with tough, salty gnocchi and undercooked prawns. I guess looks aren't everything. I'm devastated to see Ashley go, because she was my girl crush, and I liked her tats. Jennifer must have liked her too, because she cries when Ashley leaves!
Was it my imagination, or was this episode a touch lacking in drama, despite the sad ending?
at 9:14 PM

Yeah, I find it hard to believe that Ashley got pykagged before Robin or Ash, or even Laurine. Her farewell confessional was well done, though.

Ashley is this season's Arianne (who went home too early last season, also as fall guy for a poor group effort). I think this episode just looked a little on the cheap--rented house for location as opposed to posh Las Vegas restaurant kitchen--idea was to showcase the sponsor's cookware. Not sure that worked out and guest chefs seemed an afterthought. Also, there seems to be a scallop overkill; I'm voting that they be banned from future episodes.

pat -- perhaps not scintillating on the surface, but there was a lot of very subtle, nuanced stuff happening in terms of character and character development (if this season is nyc indie film, this ep was last days of disco as opposed to say, do the right thing)

loved bryan and kevin's exchange (subtext: not going there, please don't you dare talk about my brother you chubby little gromit or I'll have to rip your head off and slow roast it...)

loved "kev" taking the money over immunity (an obvious no-brainer)

loved yet another moment of jen c's very genuine, very real facial expressions in the kitchen

can't stand those creeps eli and mike isabella (as annoying as robin is, and with the understanding that yes this is a competition, a little humanity perhaps? or is that too much to ask...)

can't stand how hacky and canned isabella and toby young are. also tyler florence awkwardly (to put it mildly) trying to work his exposition about the macy's charity or whatever into conversation. why not just have padma say "tyler, please tell the people watching at home about blah blah blah, and then have tyler turn to the camera and tell us. at least then I'd be able to hear what he was saying instead of being really uncomfortable and just hearing noise coming out of my tv in the form of a drawl.

How come the rest of the chefs didn't go out and get Ashley haircuts to show their support for her???
:)