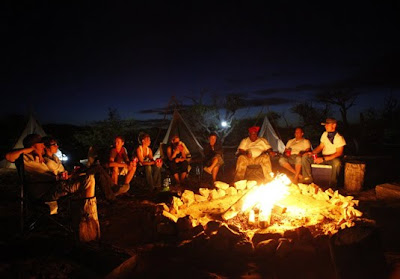 Tonight's Top Chef, episode 5 traded Vegas glitz for desert sand and cactus. I liked using the southwestern themes instead of cheesy Vegas references. Guest judge Tim Love was from Ft. Worth, Texas, and I felt like the contestants could have at least tried to give him some decent barbecue.
High stakes quickfire challenge has a $15,000 purse: Fans were able to vote by phone for the Quickfire challenge ingredient, and chose cactus over rattlesnake, so at least we were able to avoid the "taste like chicken" jokes.
Cactus, which is mostly used in Mexican dishes, can be slimey if it's not prepared right, and some of the chefs are intimidated, like the cocky Mattin says he wasn't even sure cactus was edible. Highlights: Ash misses Hector, so he decides to make a sope, but it turns into a sort of cactus grilled cheese sandwich/nopales quesadilla kind of sloppy thing. Not a success.
Kevin's smoked pork tenderloin with cactus marmalade looks pretty nice, but my favorite idea of this challenge was Ashley's cactus jelly donuts with orange cream. Where can I get one of those? 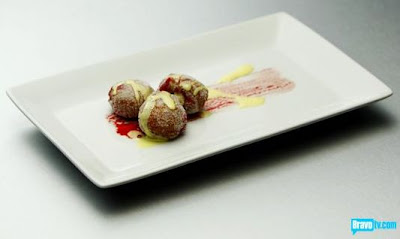 Cactus jelly donuts with orange cream: Now that is original!

Stupidest idea: Ron says Haitians never cook with cactus, so he makes a sauce from the cactus because he didn't know how to work with it. The judges couldn't really taste the cactus in the sauce.
The winner: Mike for his sliced nopales and raw ahi in a pepian sauce. It looks deceptively simple, and I feel like all the contestants are relying way too much on ceviches and other crudo preparations, I suppose because they're both trendy and don't need any cooking time.
Elimination round: The chefs have to make lunch outdoors using firepits and a chuck wagon pantry for cowboys at Sandy Valley Ranch, but first they must bond by sharing tipis overnight on the ranch.
Requisite lesbian tension: None really, but I think Ashley and Robin got to share the tent, and Robin proclaims, "I love getting dirty!" Random: We learn a little more about the chefs' personal lives: Ashley talks about growing up with a single mom in the woods on food stamps. Eli, who says the temperature in the desert is "around the temperature of Venus," doesn't believe in camping -- it's his idea of a living hell. Also, he has a girlfriend. Kevin had a regulation horseshoe pit growing up, so that's eccentric.
Brotherly tension is encouraged again, as Michael and Bryan have to share a tent.
Elimination dishes: Mattin, intoxicated by his cactus with tequila success in the first round, decides to do ceviche three ways with a margarita, cannily remembering that the judge likes tequila.
Laurine, who has lived on a ranch, thinks the guys making ceviche are cheating, and I agree. Bring on the Q!
I'd eat that: Kevin's duck breast with mole and tequila-marinated watermelon seems a little fancy for a ranch, but looks like a good flavor combo.
Eli makes a tuna sandwich -- can he be any more boring?
The losers: Frankly none of these dishes look like delicious cowboy food cooked over an open fire -- they look more like fine dining fare.
The loser: At the bottom were Ron, whose ceviche with coconut wasn't bad, but the teetotaller Ron killed with a coconut mojito. Also Robin, whose grilled prawns "inspired by steak," whatever that means, tasted of chlorine, and throwing bacon on it was of no help.
But Mattin is the ultimate loser for his lame idea and bad execution of feeding a trio of ceviches to cowboys.Tom Colicchio says Mattin's cod ceviche is "gross" and the guest judge is feeling ill.
Guys, whatever you do, try not to feed the judges bad fish. That really gets them testy. 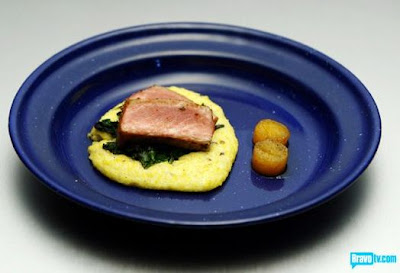 The winning dish: pork loin with polenta, dandelion greens and glazed rutabaga
The winner: The fetching Ashley is finally recognized for her halibut with avocado mousse and bacon. The judges also like Michael's very Japanese black cod with dashi. But best of all, they like Bryan's pork with polenta. Personally, I would have liked to see more use of the firepits and less friggin' raw fish in the middle of the desert. Bryan now feels like he's gaining on Michael, and it looks like the judges are determined to play up the brother angle to the bitter end.
Next week: Penn and Teller come for dinner. No bullshit!
at 9:10 PM

Nicely done recap of a bad episode. Hoping the Penn and Teller episode is better.

Seriously, they need to ban ceviche!

If memory serves me right Padma said several times, during the announcement of the challenge, "high end" or something to that effect. I think they were supposed to make fine dining food for the cowboys.

I was confused -- which of those pallid, overdressed foodies were supposed to have been "cowboys"? And what the heck are cowboys doing in the middle of a god-forsaken desert? Seems to me the producers saw too many westerns produced in "scenic" locations and don't know reality from fantasy. Makes you wonder what other distortions they make on this show to create a fake story. It makes you wonder if the contest is even real.