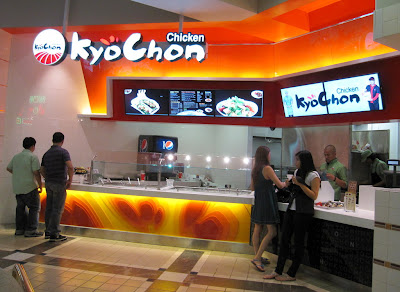 The Glendale Galleria has one of the better food courts in any ordinary, Hot Topic kind of mall. There's not just one but two stalls from perfectly respectable Massis Kebab, and a Brazilian place that has some of the best garlic collard greens around. Now there's another reason to not to fear the mall quite as much: Kyochon Chicken has opened a location in the mall, but it's substantially different from the 6th St. minimall location. The menu is both broader and narrower: there's several types of salads, chicken wraps and bowls and macaroni & cheese (huh?). 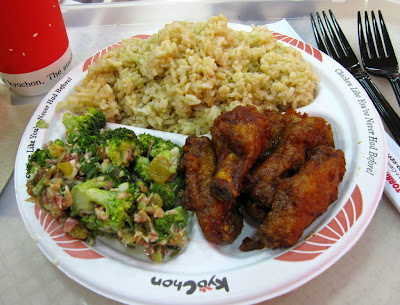 But the chicken itself -- the centerpiece of this temple of Korean fried chicken worship -- is only available in wings, instead of the drumsticks, which are a superior crunch delivery system. The other fatal flaw, however necessary to operating in a mall food court, is that, judging from the speed with which my order was filled and the resulting lukewarm chicken, it must be cooked ahead of time in large batches. Now, as everyone who has been to Kyochon knows, it might take its own sweet time coming out but when it does you will be amply rewarded. The lukewarm wings still had a nice sweet and spicy flavor, and the broccoli salad with raisins and bacon wasn't half bad.
Verdict: If you desperately want to taste this stuff and you happen to be near the Galleria, it's not a bad lunch option. But if you want a real Korean fried chicken experience, go to the Sixth St. location, or to Bonchon, which is preferred by our fellow bloggers at Franklin Avenue.
at 9:53 PM

Very cool. Now I'll have somewhere else to eat besides Massis Kabob after throwing my money away at Forever 21 & Sephora. I also have yet to try the Brazilian place...you're right, Glendale Galleria does have a slight one up on most food courts, esp.now w/ the addition of Kyochon.

I had a hard time with the Kyochon v. Bonchon debate since I only eat Korean FC's once a in a great while, but now that I had the opportunity to taste the two in a relatively short timespan, Bonchon > Kyochon for me...

Even if KyoChon is watered down, it still sounds like a good Galleria addition.

In my 6th Street experiences, it's been no contest. KyoChon was much better than Bonchon for flavor and texture.

Thanks for the report and very important FYI that this mall-based Kyochon has to pre-cook their Chicken (makes sense to be able to satisfy the random "I want it now" mall customer). Like you, I'll be sticking with the K-Town branch or Bonchon. :) Thanks.

I just stumbled across this blog and I love it. Thanks for the Glendale info!

Service is slow but really good fried chicken!!! it's expensvice though and the wings is ridiculously small!