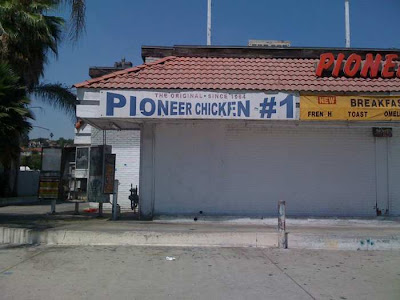 photo from Bonatso
Working on the Baja trip posts, but in the meantime here's some local news:
Pioneer Chicken in Echo Park seems to be down for the count. Amazingly, the one in Silver Lake is still open. My favorite part of that one is the rusty playground equipment area that was taken over by Sunset Nursery. Story at Eastsider LA.
***
Larkin's in Eagle Rock has received its conditional use permit and is on the road to getting a beer and wine license, just two years or so after opening. According to several recent blog posts, Larkin's is also considering a Downtown location. Anyone eaten there lately? Here's EatingLA's review from a few months after the opening in 2007.
at 4:00 PM

We went to Larkin's a few months ago - really looking forward to it since there really isn't any other soul food on this side of town. what a disappointment - an expensive one, too. the mac and cheese was the blandest thing i've ever eaten (and they forgot to put the order in), our entrees were doubly bland, and although there was only ONE other table that night, our waiter couldn't be bothered with us. it was awful.

i have to concur with the sentiments of the previous person leaving a comment... larkin's is a huge disappointment in my opinion... considering a "downtown location"? in addition to the eagle rock location or instead of (implying a move)? i hate to slam small businesses that i know means well, so i'll just say this... the good thing about Larkin's getting a beer and wine license is that if you are a little looped you might not notice so much the mediocre quality of the food or the sub-par, snooty, inattentive dining experience. nuff said.

I used to love pioneer chicken, but am reminded of another probably long-gone LA chicken chain - Goldbergs's. Believe they had at least one outlet on La Cienega or Robertson by the 10...they were good (and kosher, fwiw).