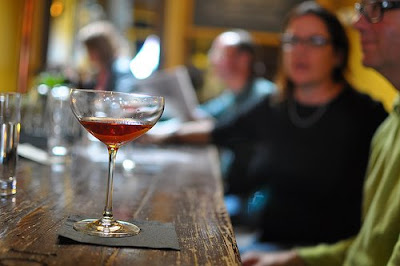 We had just a small time to taste the bounty of San Francisco, but we made the most of it. Kathy wanted to stop by True Sake (below), the only store outside of Japan dedicated solely to selling sake, so we stopped in and talked with owner Beau and his charming daughters. 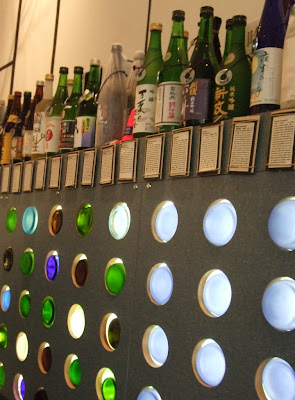 We looked around the blossoming Hayes St. neighborhood at the adorable Frjtz, dedicated to Belgian fries and mussels (explain to me why we can't have this in L.A.?), made a note to try Suppenkuche, Sebo and Bar Jules on our next trip and had a knockout chocolatey iced coffee and some beans to take home from Blue Bottle. 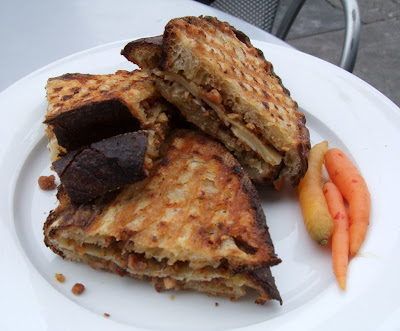 Lunch was an impossibly rich sheep's milk cheese and almond sandwich (above) on flavorful bread and a piece of flaky, delicate quiche Lorraine at Tartine Bakery. It was impossible to fit in all the ice cream I wanted to try, so I deputized Kathy to taste the Ritual coffee/toffee at Bi-Rite Creamery -- a bit too heavy for my taste -- while I tried caramel with balsamic vinegar at Humphrey Slocombe, one of the best flavors I've ever had. 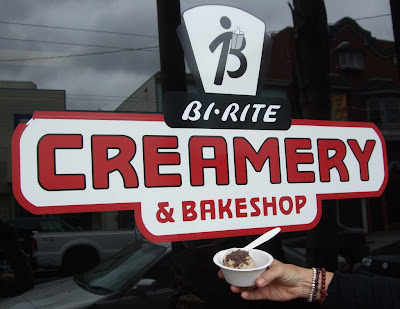 Their chocolate tamarind and peanut butter curry also hit just the right note for my ice cream sweet spot, which lies somewhere between Pazzo Gelato's quality fabrication and Scoops' bizarre combos. We worked up cocktail appetites strolling around the Sutro Baths, then repaired to Haight St.'s Alembic for cocktails. Recommended by Golden State's Jason Bernstein as one of the top bars anywhere, Alembic specializes in carefully crafted cocktails made with craft liquors, a well curated beer list and a fascinating nose-to-tail menu which, unfortunately, we didn't get to taste. 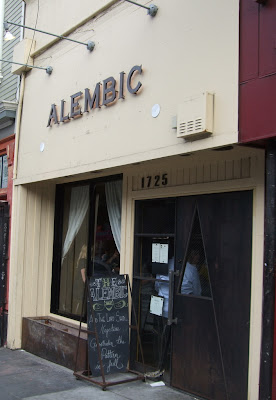 I tried a Vow of Silence and a variation on a Monte Carlo that the bartender invented for me, and we also tried a Promissory Note and some killer daiquiris and margaritas. At Alembic, we ran into Jesse from S.F. beer and food blog Beer & Nosh, taking pictures of the bone marrow dish.

We were basically sloshed and stuffed by then, but we also enjoyed tasting four different ceviches (above),

including one with coconut milk, at Fresca, a mini-chain of nouveau Peruvian restaurants. Peru-mania seems to have already hit San Francisco, and looks to be taking off in L.A. too, between Mo-chica and the upcoming Osaka, if it ever gets finished. The next day, we drove down the coast to Santa Cruz, stopping to buy fresh artichokes, peas, strawberries and cherries as well as some local beers like this can of Siamese Twin Ale from Santa Cruz's Uncommon Brewers.
Best of all, we're already started on our list of places to try next time, including Jesse's recommendations of Magnolia, Weird Fish and Coco 500.
What else should we add to the list for next time?
Here's some previous EatingLA Bay Area trips: 2006 and 2008.
at 10:29 PM

Nice rundown. You really packed in the tastes. Must try Alembic and Humphry Slocombe. I had a good lunch at Coco500 and a solid brunch at Bar Jules. Magnolia has aligned itself with The Linkery, which is a good sign.

As a Santa Cruz girl, born and raised, I say Dharma's, Charlie Hong Kongs's and Pearl of the Ocean when you are in Santa Snooze
I am trying to get the other UG up there with me next weekend.