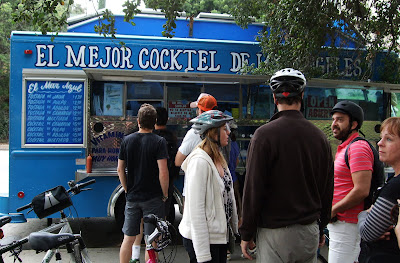 EatingLA and FoodGPS' first Bike Bender tour was an epic win, as the kids say, with pleasantly cool weather and at least 30 enthusiastic riders. For our first try at organizing a bike tour, we picked Highland Park for its accessibility by Gold Line, easy biking, and proximity to the Verdugo Bar.
After meeting up at the Heritage Square Gold Line station, we rolled out to the stop #1, the El Mar Azul Seafood truck at Sycamore Park. Owner Felipe was ready for us and managed to serve everyone fairly quickly, with fresh shrimp and avocado tostadas enlivened with onions, hot sauce and his secret mayonaisey sauce. Picnic tables at the shady park made it easy to accomodate the group comfortably, and one rider who had a flat tire was luckily able to change it at her house next to the park and catch up before we left. 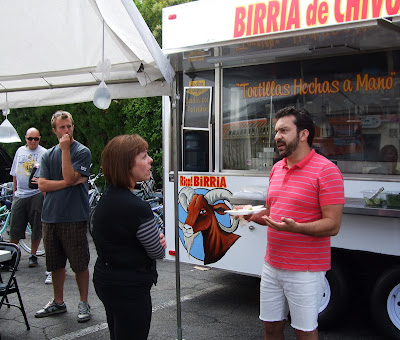 After a short hill, stop #2 was the El Pariente truck at Ave. 50 and Monte Vista. El Pariente specializes in birria (goat), and Food GPS' Josh tried a big bowl of birria soup, while the rest of tried various combinations of birria, carne asada and chicken tacos. The selection of four homemade salsas, each hotter than the one before, is a bonus at this truck which also makes its tortillas by hand. Picnic tables under an awning also make this truck more comfy than the usual truck. 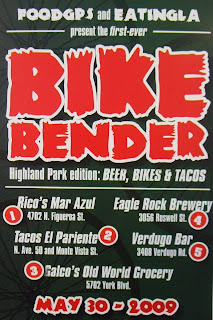 Stop #3 was Galco's Soda Pop Stop, well-known to foodies but always a good pitstop for a soda or a head start on the beerdrinking. My sister Joan who was visiting from Berkeley picked up some vintage candies at Galco's.
Stop #4 was a real treat arranged by our friends at the soon-to-open Eagle Rock Brewery. We got a tour of the facilities, which are actually located in Glassell Park, and preview tastes of three of the beers that brewmasters Jeremy and Steve might be planning when the brewery opens in late summer. The Jubilee holiday ale was especially flavorful.
The beers, bikes and tacos tour ended stop #5, the Verdugo Bar, where the riders sampled a keg of Firestone Walker Union Jack IPA and bottles of Firestone Hemp ale and Nectar ale. We also tasted a box of pastries from Glassell Park's Butter Tart bakery, a little treasure we didn't have time to visit.
A few partiers stayed on for the bar's opening at 6, while the rest of us carefully wobbled our way back to the Gold Line stop.
It was a rousing good time, and we're already thinking of the best destination for the next tour.
Thanks to Verdugo Bar and Eagle Rock Brewery and to graphic artist Cheyne Gateley, who designed the awesome spoke cards.
Here's Josh's report on FoodGPS, with more info about Eagle Rock Brewery.
There's more photos on this comprehensive LA.com recap from Andrea Adleman.
at 2:27 PM

aw, man. I chose electrical work over this. Sure, I have working pario lights...but, damn, you guys had fun! Hopefully looking forward to the next one. East side?

I highly recommend Buttertart for their pastries. Everything there is good, but their coffee cake is the best I've ever had.

I was out of town, so I hope there will be another one!

I am looking for a photo of El Mar Azul taco truck for a "Taco World" slideshow on FoodandWine.com and was wondering if we could have permission to use your image? We would be happy to give you proper photo credit and a link to your site. Please let me know at kelly.bazely@aexp.com. Thank you very much.