Silver Lake: Are you ready for a BBQ Record store and roving vegan cupcake truck? 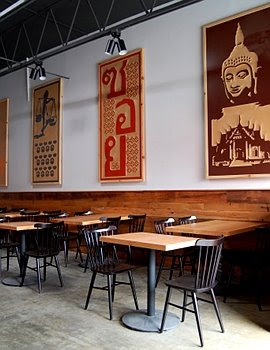 Soi 56 from Thrillist
The Silver Lake/East Hollywood area is getting a combination record store and BBQ spot called Territory where Lilies Pizza is now on Hoover, according to Racked LA. Sounds almost painfully hip, since the people behind it run the Endless Summer taco truck in Silver Lake West, aka Williamsburg.

Blogdowntown brings the news that Babycakes vegan cupcakes -- another New York import -- will move in next to Cole's and the Association on 6th St. near Main...and get this: Babycakes is also promising a roving dessert truck to bring its vegan treats to West Hollywood and Silver Lake, for those who can't make it Downtown. Anyone tried Babycakes? I had a vegan red velvet cupcake this weekend and seriously missed the real cream cheese frosting, although the cake part was good.

The opening of Soi 56 in central Hollywood was announced two weeks ago, but apparently it just opened last night, which is why we haven't heard any reports yet. With lots of skewers and more street food-type items, Soi 56's food is a departure from the menu at Rambutan, Tuk Tuk and Chadaka, which have the same owners, and it's open from 11-11 7 days a week.
at 5:23 PM

They won't have beer and wine until June 1.

Also, here's more on Territory. Sounds like a good addition to Silver Lake (if it's even considered Silver Lake) that seems to tap into the neighborhood's vibe.

soarpicI also question if that is Silver Lake, what is the cross street? Aside from that where is Williamsburg, give me some boundries so I may learn? Where is this Endless Summer taco Truck parked, would love to check it out. is it the real deal or is it just some hipsters idea of a taco truck.

SO excited about Territory -- I live just down the block. Before Lillie's Pizza, it was a sad-looking taco place. I've been hoping this stretch of Hoover might get shined up with some non-sad-looking food options!

I'm all about roving cupcakes!

Burger Boy, Williamsburg is in Brooklyn and I have a feeling we have better taco trucks here! But we will see. The cross street for Territory is Hoover just south of Melrose. Maybe it's Hel-Mel?