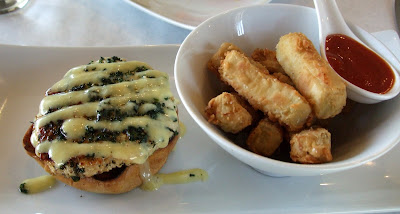 open-faced scallop burger and eggplant fries
Umami Burger has added some awesome new items to the menu, and several new employees have been added to help deal with the crowds, particularly in the evenings. But when I arrived a few minutes before 1 pm on Monday, I was again the only person there. After I sat down, the whole place filled up almost instantly -- strange, everyone seems to eat lunch at 1:15. I had almost decided on the Hatch chile burger with five kinds of chiles when the owner, Adam, told me they were also making the scallop burger he had told me about earlier. He also swore that they had been working on the fries, which most people felt had too much fluffy interior and not enough crispy exterior. 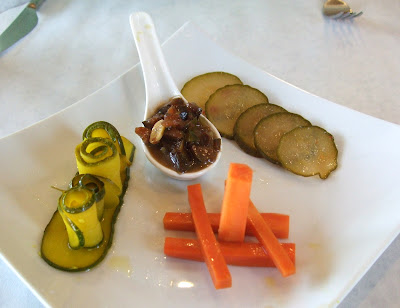 So when my friend Diane arrived, she ordered the Umami burger and fries, while I had the scallop burger and eggplant fries -- I can't resist anything with eggplant in it. A plate of various pickles arrived for us to taste, with standout spicy slices, tangy pickled carrots, and a chutney-like mixture. My scallop burger was served open-faced, the better to highlight the flavor of the grilled scallops that were somehow formed into a loose patty enlivened by seaweed, basil and a creamy sauce that was somewhere between aioli and hollandaise. If the scallop burger was this good, I can't wait to see what he's going to do with the lobster roll that's coming soon. The eggplant fries were nice and crispy and the regular fries were improved from the first time, but I hear the malt liquor-battered onion rings are the best way to go. Although this place is all about the meat, the new veggie burger, "full of umami flavors like mushrooms," Adam says cryptically, is served "rare, au jus" with some sort of faux blood (beet juice?) to satisfy the umami-craving vegetarians out there. With easy parking and two minute drive from my office, I think I'm going to have to work my way through the whole menu here.
at 8:49 PM

I've tried the Pork Burger and the Lamb Burger (which i wasn't a huge fan of, flavors were overwhelming). I can't wait to go back and try this, along with the improved fries. Looks like they gave up on the Lincoln log french fry house too.

Onion rings... GOOOOOOOOOD. Can't wait to try the mushroom burger I've been waiting for it. I personally am bummed that the turkey burger is gone, but the turkey (and the duck) probably aren't.

Oh man, I've been waiting for a decent, affordable lobster roll in this city forever! Let us know when it shows up.