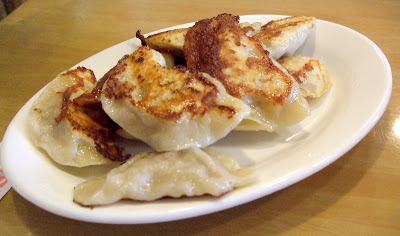 What can you say about a fried pork dumpling that died a slow, happy death in my stomach? That it was crispy, with plenty of well-browned caramelization on the surface. That it was stuffed with succulent, lightly-spiced, juicy pork. That it attained a whole new level when dunked in a mixture of soy sauce, vinegar and chili sauce. And that it sacrificed itself along along with a half dozen or so of its sisters for the good of my appetite.
I pulled up to the deservedly popular Luscious Dumplings on my bike Sunday, thinking 1 pm was a reasonable hour for lunch. But the waiter showed me that the menu already had more than half the items crossed off, so although Josh and John hadn't arrived, I quickly ordered before anything else ran out. Fortunately, the signature pan-fried pork dumplings were still available. We also got steamed dumplings with chive, pork, shrimp and egg, brisket noodle soup and pork and pickle noodle soup. All dough, all the time. When the dumplings arrived, we all pounced on the fried ones first, since fried things are usually best when nice and hot. It took a while to ruminate on their lusciousness, so when we got to the steamed ones, they weren't quite as hot and didn't seem as exciting in comparison. Still good though, especially with a little sauce. 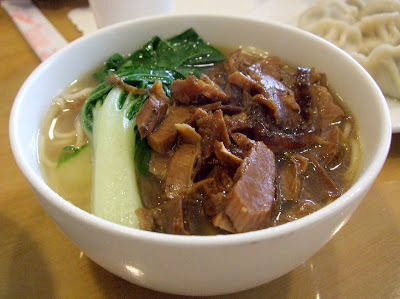 The brisket soup (above) was good stuff -- almost like something a Jewish grandmother would concoct, with tender meat, a fragrant broth and hearty spaghetti-like noodles. I was bummed that they ran out of the tofu plates, but this was a beautiful bike ride on a sunny spring day, so I imagine I'll go back soon, a bit earlier in the day.
Tip: It's cheap -- order lots of stuff and you'll be so happy to find it in your fridge later that night or the next day.
Luscious Dumplings
704 W. Las Tunas Dr., #E4
San Gabriel
626-282-8695

P,
I INSIST you try Kingburg across the street from Luscious dumpling. They make a far superior bowl of beef noodle soup, and the baos/dumplings are all wrapped/steamed on the spot.

Oh my god, I was going to have lunch at my desk but I think I shall run down to San Gabriel. I'll try Kingburg, although Pat, you instilled a powerful Luscious craving in me!

what about the other dumpling house in arcadia i have heard of... whats it called?

You should try the fish dumplings. They're amazing. It's one our favorites.

Also we realized how emo Luscious Dumplings is. They never pick up the phone for togo orders.

Thanks Tony, I'll def. try Kingburg. David, you're probably thinking of Din Tai Fung. Also a great place, usually crowded but better now that they have an annex. Had some wonderful Chinese broccoli there too.
and Lilcee, I'll have to go back, they were out of all the fish ones.

What I like about Luscious is that, like Bamboodles, they don't use MSG -- or if they do, such a tiny bit that my ultrasensitive migraine-prone head doesn't pick it up...

Lilcee, I don't understand why a restaurant would be considered "emo" because they don't answer the phone...?

I agree..I am truly obsessed with this place. Hands down the best pan fried pork dumplings you can find. If you are looking for the steamed pork soup dumplings I suggest you go over to my other favorite
J & J's. These places never disappoint.

I made my first trip here today. Wow. My brother had suggested Din Tai Fung but I am bored with that place. This was simply outstanding, perhaps the best dumplings I have ever had.