BottleRock is up to new tricks in Culver City and Downtown 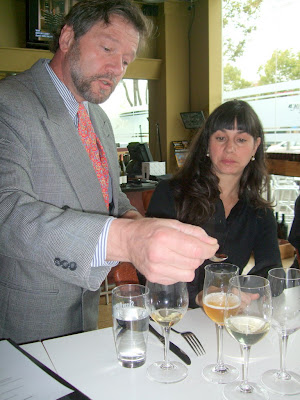 At a media tasting to introduce BottleRock executive chef Jared Levy, we got to hear about the new BottleRock Downtown as well as sample some fascinating wines and potions selected by sommelier George Skorka. The Downtown BottleRock, opening in March at 11th and Flower will be twice as big, with a more ambitious menu, says Levy. He's also revamped the Culver City menu, despite the tiny prep space, with housemade rilletes and pates and new lighter dishes. Foie gras torchon with kumquats from his backyard probably isn't the lightest, but it instantly became my favorite bite of the week. 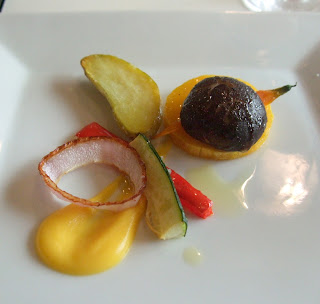 At $6 a plate, I'd stop by for foie gras and a glass of wine anytime. Gambas -- Spicy gulf shrimp, smoked paprika and garlic were an amazing match for the 2007 Robert Eymael Urzig Wurzgarten -- or a slighty sweet but complex Riesling, to the non-oenophiles. Another great match was the 2007 Le Rote Vernaccia di San Gimignano DOCG, with sauteed scallops. At $13.99 a bottle, I'm going to have to pick up one of these for my next shellfish feast.
The most fun tip I picked up? Skorka suggests a newer twist on a kir or kir royale: try a few spoonfuls of Ruby Port in sparkling wine or in Belgian-style beer. He calls the one with wine, Turkish Blood and the one with beer, Hungarian Blood. Sounds better than True Blood anyday!