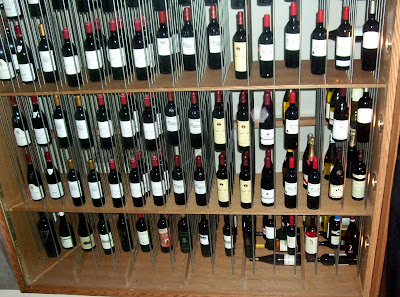 A quartet of independent producers discusses their next project; an elderly bleached blonde dines with her wheelchair-bound companion; a few agent types belly up to the bar, while next to us, two Beverly Hills couples return to check out one of their faithful spots.
It's a typical Sunset Strip crowd at Talesai, which chef Kris Yenbamroong says was considered cutting edge when his parents opened it 25 years ago -- when he was just one year old. Kris recently decided it was time to freshen up the menu, with stronger flavors and higher quality ingredients as well as a makeover for the room. We were invited by the chef to try some of the new dishes, so this isn't a real review -- but the manager told us they spotted S. Irene each time she came in, so I'm guessing she was treated well, too.
The new menu and look is all a bit much for the BH couples, who requested their old favorite mee krob off the menu and were not thrilled with the changes. Change is difficult for some folks, to be sure, but those who aren't clinging to 1980s Thai food should see a vast improvement in Talesai's dishes. We started with mushroom fries, similar to mushroom tempura -- I love mushrooms and I love anything well-fried, so these hit the spot. 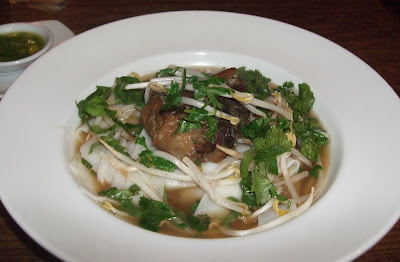 Larb made with filet mignon had just the right spice level to not scare away the regulars but still provide a little zing, with none of the gristle you sometimes get in cheaper restaurants. Zingy housemade pork Thai sausage was probably my favorite taste of the evening, although the sticky rice it's served with probably doesn't need to be made with sweet coconut milk. Fried chicken with housemade nam prik sauce had a delicious crust, but it might be a good idea to offer a spicy sauce and a mild one for different tastes. A duck "tamale" steamed in a banana leaf is basically haw mok but with duck instead of seafood -- the delicate custard is fragrant with kaffir lime, and the duck makes a nice change of pace. Subtle oxtail noodle soup (above) was nicely perfumed with anise. Most Thai restaurants don't have much of a choice of wine, but Talesai's new list has several good choices -- I had a glass of spicy Allimant Laugner gewürztraminer.
Fans of Ruen Pair and the like won't need to rush over here, but those looking for flavorful, well-prepared Thai food with interesting wine and cocktails and those who need a restaurant near the Strip will find it a welcome update.
BTW, chef Kris told us that some of his favorite local Thai spots include Ord Noodle and Palms Thai in Thai Town, Sri Siam in North Hollywood (ours too!) and Bua Siam in North Hollywood, although he wasn't sure if it's as good as it used to be.
at 10:20 AM

Are those bottles in the wine wall standing up? Not a good method for long-term wine storage.

Anonymous, that was the only thing I saw in that picture as well. Any place having a good wine selection should know this too.

I was there, the picture is posted wrong, they are laying on the side,
BTW, a very smart tight list. Selections really pair with the food well.