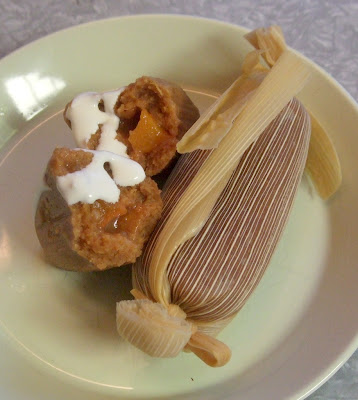 A ginger-peach sweet tamale and a wrapped fignana tamale

I wrote about La Guera Tamalera, the White Girl Tamale Maker right after I met her at a tamale making class so that people could order tamales in time for Christmas. I finally got to try them when she kindly dropped some off the other day. Deborah learned how to make tamales from a family in Veracruz, Mexico, and that's why her tamales are tied on the ends, because that's the Veracruz style.
Maybe it's because I'm a white girl too, but these are my favorite tamales, like, ever. Don't get me wrong -- I love all the traditional pork tamale fillings, masa made with lard and all that, but I don't often eat those kind of tamales because they're just too filling and heavy for this white girl. These tamales are completely different -- the organic, non-GMO masa is light and has its own distinctly nutty flavor, rather than just being an enclosure for the filling. I tried:
Chicken: this flavorful filling is made with free-range chicken in a tomatillo sauce,
Spinach and shitake mushroom: A vegan variety that I liked even better than the chicken; have one of each for a complete meal of veggies and meat.
Sweet tamales were even better, and made a wonderful breakfast fresh out of the steamer.
Fignana: The fig part is subtle; this one is basically like the best super-moist piece of banana bread you've ever had.
Peach/ginger: This was my favorite, since it had that tangy thing going on with the sweet, earthy masa. It's like a fruity gingerbread.
La Guera's other flavors include locally-raised pork in red sauce, jalapeno & cheese and butternut squash.
While Deborah makes appearances everywhere from The Verdugo to the Atwater Christmas Festival, right now home delivery is the best option, at $58 a dozen. They will also be available at Locali on Franklin when it opens in the next few weeks.
at 12:40 PM

I have got to get you some of Mo's mother's tamales. I know you would love them.

Interesting that Locali is opening about two or so blocks east of the Oaks Market where Greg Morris will be opening in the former Victor's Liquor space, and that their liquor licenses were activated within a week or so of each other.
And the first name of the owner of Locali is also Greg!!!
Should prove interesting, almost as much as those tamales you describe above.

$58 is insanely expensive for only a dozen. They look pretty small in the pictures but they do sound good. It's a given that organic/natural ingredients kick up the cost but it should be around half that price. =)

$58 for a dozen tamales? Ni lo mande Dios! With all due respect for "La Guera Tamalera", I'm sure her tamales might taste very good, but tamale purist that I am, I think I will stick to classic pork tamales and either make them my self or give the $60 bucks or so to a little viejita who can really use the money.
Other than that I wish her success.
Clementina
A Little Cup of Mexican Hot Chocolate