Cook's Tortas: Why aren't they everywhere? 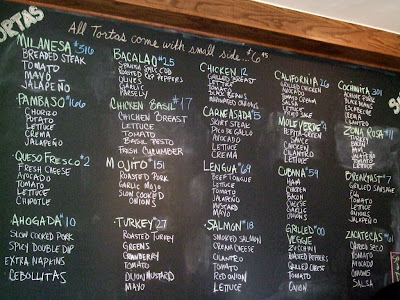 It's a shame that nasty-tasting places like Samurai Sam's and Subway are spread out all over the city, but you have to go to Monterey Park to try the wonderful Cook's Tortas. My favorite kind of sandwich is probably the banh mi, but tortas as good as these will have to run a close second. Cook's, which opened last spring, is a whole different kind of torta place -- they have the typical torta varieties like carne asada and chorizo, but the menu changes regularly, rotating in a galaxy of other types. There's bacalao with cod and roasted peppers, several vegetarian selections and my instant favorite, chicken with mole verde. 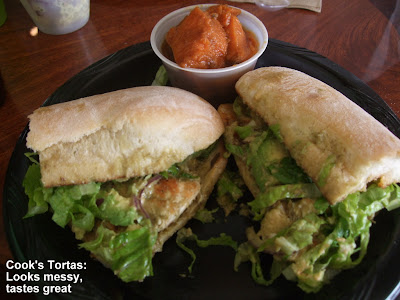 The mole was creamy and tangy -- maybe there was some aioli in there too -- but it elevated the chicken to a perfect combo of soft bread, creamy sauce and avocado and grilled chicken. The house-baked torta rolls are soft enough to not tear your mouth apart while chewing, a pet peeve of mine with sandwiches on French bread, but still have flavor and body. Matt's Mojito pork sandwich was also delicious, but lacked the tanginess that put mine up there into sandwich nirvana. 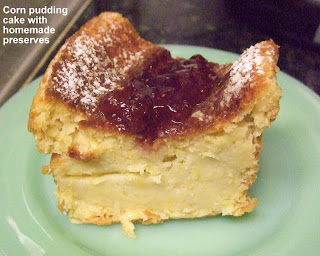 We had housemade cucumber-lime and jamaica aguas and for dessert, I tried Grandmother's corn cake. I love corn in desserts, but it was a touch too reminiscent of canned creamed corn to really work for me. I had a side of yams, and Matt had potato salad. There's also coffee drinks, pastries and BBQ on Sundays from 12-4.
If Cook's was in Silver Lake or Los Feliz, it would probably be constantly packed, but in a rather far-off part of Monterey Park, near East L.A., Saturday afternoons are pretty mellow. Now if they would just open a few more...
Cook's Tortas
1944 S. Atlantic Blvd.
Monterey Park

And on your rec I finally tried Little Dom's. Have you tried the Muffaletta? Definitely the best I've had in LA.

Ooh, these look so great! I love tortas!

Everything there is good. It is family run, they are really nice people, they have another restaurant, mariscos, not to far away. Make the trip it is worth it.

Yaihaira's on colorado in pasadena had a pretty good torta last time I was there... and of course there's always portos!

Highly rec the Zacatecas - the avocado puts it over the top.

Great recommendation Pat. We tried the #151, mojo pork--really excellent, approved by two ex-Miamians and the California-tasty and super fresh bread. Very eclectic mix of customers; too bad it's not a tad closer to Silver Lake tho only takes about 15 minutes to get there w/o traffic. I'd try their fish resto which is just down the street near Starbuck's.

The food there is awesome,and the desserts omg! I'm hooked.

Delicious Tortas; salads and cucumber lime water. I have nvr had anything like this before! If u haven't tried them, stop &.get one or two! Great customer srvc