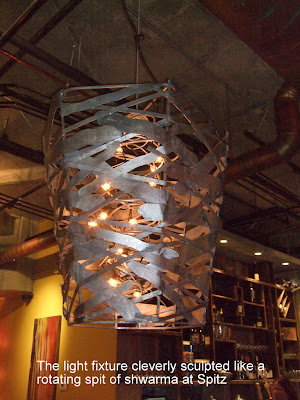 When Spitz and Oinkster in Eagle Rock opened about two years ago, Northeast L.A. got a taste of the new wave of reasonably-priced casual food that's actually good. At Spitz, everything from the sweet potato fries to the Lamill Coffee was well-thought out. The new Little Tokyo location adds beer and wine to the mix, creating a homey hangout spot for Downtown dwellers and workers. Although Little Tokyo has a many good restaurants, Jeremy Piven showed us that you don't want to eat sushi every day, so a chicken or lamb doner kebab seems like a good way to vary the diet. 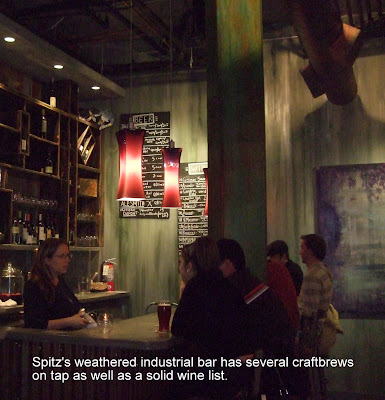 The sandwiches are available in wraps or as foccacia sandwiches, and there's also vegetarian falafel for non-kebab eaters. I was invited for a small press preview and tried the combo doner plate, which is a greatest hits basket of salad, chicken, lamb, falafel and fried pita strips on a bed of French fries and sweet potato fries. The beer menu had some interesting selections -- Spitz owners Bryce and Robert were able to convince the notoriously choosy Craftsman Brewing to take them on as a new account. 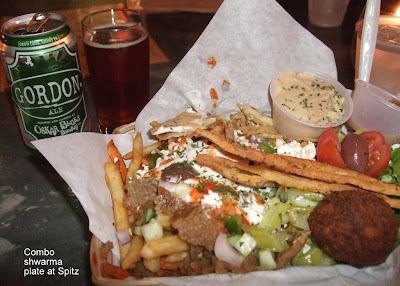 I tried a can of "the world's best canned beer," the Gordon strong ale, which had a nice hoppy flavor but had less carbonation than I would prefer. Instead of the gelato like the Eagle Rock location, the Downtown Spitz is experimenting with dessert kebabs of chocolate, fruit, mascarpone, etc. While I can't get too excited about the pricey steakhouses et al over at L.A. Live, beer and doner kebab at a decent price are something everyone Downtown can be happy about.
(press preview)
at 9:05 AM

Good overview of the new Spitz location. Also, nice new feature: the captions over the photos. I like it. Happy holidays.

It is nice they are using LA Mill coffee, yet wonder why I don't get excited over it since the concept of coffee with any of their menu items seems a bit incongruous.
Nonetheless, in keeping with their ethic, it provides another quality beverage choice.

beer fanatics are excited that they have Craftsman beers there..