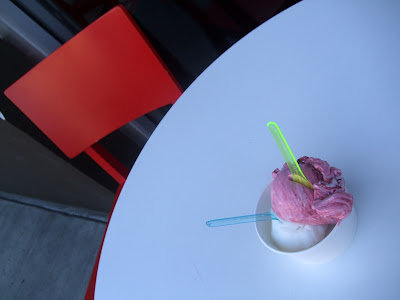 EatingLA left the Eastside for a field trip to Venice the other day, where we happened upon N'ice Cream: Nielsen's Homemade Gelato and Sorbet on Abbot Kinney Blvd. N'ice has only been open about a month, and the Danish owners use organic milk for their gelato. The flavors weren't too crazy but the sour cherry gelato was really well-balanced and creamy, and the lemon sorbet was pleasantly tart. I prefer the Italian-style where they pack as many flavors as you like into a cup -- N'ice goes by the scoop, but it's only $1 extra for another scoop. Strangely enough, there's a Pinkberry right next door. This is the perfect set-up for my daughter, who only eats chocolate gelato, and me, who likes a Pinkberry with Oreos every now and then. 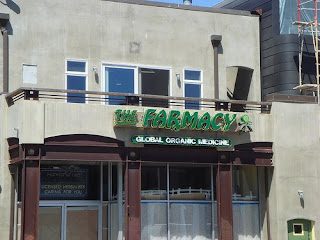 Even stranger, though, was seeing the ice cream counter at the Farmacy with my own eyes. I remember when Jenny at Grubtrotters wrote about the pot dispensary/bakery/gelato shop a while back. You don't need a medical marijuana card to get into the front part of the store, which is a combination herbal/natural medicine emporium and bakery selling enhanced items like gelato, soda pop, lollipops and the all-purpose Canna butter (great for brownies!) for $30 a tub. There's also non-enhanced gelato, but in that case, you might as well go to N'ice, which was quite nice indeed. Has anyone tried the trippy gelato?
at 6:38 PM

I'm more of a pinkberry fan myself, but to be fair, I've never tried the farmacy.