Dim sum with the baby foodbloggers 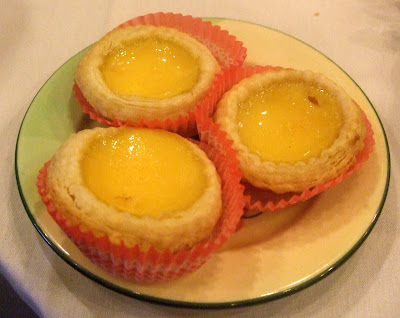 For some reason I seem to have had more dim sum in the past four months than in the four years before that. This Saturday a group of food bloggers met up at the Arcadia Hop Li, which turned out to be really good for cart dim sum. 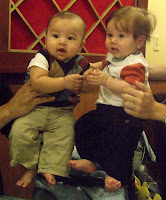 The food bloggers are ready to launch the next generation of bloggers -- Pam from Daily Gluttony, Jonah from la.foodblogging and Jessica from RitzBites all brought their adorable baby boys. Also there were Pauline (aka Maxmillion) from la.foodblogging, H.C. from LA and OC Foodventures, Josh from FoodGPS, Mattatouille and Javier from Teenage Glutser. The egg tarts were some of the best I've had since the late, lamented Macau Street, the char siu bao were like succulent baby BBQ pork sandwiches, and the "provincial-style" shu mai (right) were interesting and different. 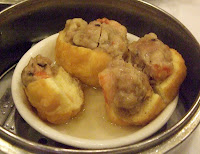 And the taro dumplings were far better than at Top Island, with juicy ground pork on the inside and lacy freshly-fried taro on the outside (left). H.C. very helpfully peppered the servers with questions in Chinese about what was in some of the items.

The only one I didn't care for was one of the shrimp dumplings, which was giving off a funny off smell. Arcadia is a bit far, but if you want dim sum on the traditional carts, I'd definitely recommend Hop Li.
at 1:20 PM

Mmm! I'm still a sucker for carts, so thanks for this rec. :)

it was so nice seeing you again pat!!! now that i know a bunch of us live in/near the SGV, let's definitely meet up again soon for some more good eats!

Definitely fun meeting you and all the other bloggers. Very fun, and again, I loved how the carts come in waves. No food when we were looking for something specific, but when it's time for the check our tables are flanked by 3-4 carts!

yeah, something magical happens when a bunch of foodies get together for Dim Sum...

looking forward to seeing you again!

Lovely to finally meet you, Pat. Alas, I didn't get to sample Hop Li's goods as widely as I would have liked! I basically scarfed down whatever was in front of me while my kid wiggled in my lap.

i like this place for dim sum too and love that i have never had to wait for a table there. your blog is great!

My coworkers and I come here at least once a month. Sadly, I wasn't able to go with them today. They surprised me with a care package of my favorites when they got back. Their Chun Fun melts in your mouth.