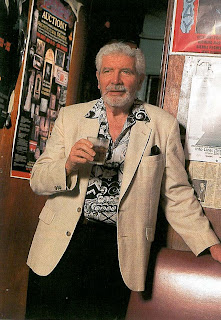 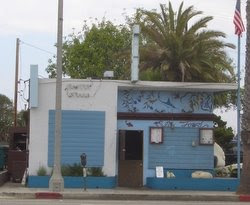 Fiondella was a real Hollywood character who drew everyone from Frank Sinatra to Sean Penn to the little Ocean Ave. shack with the sawdust-covered floor for steaks, martinis and the famous potatoes au gratin with bananas.
Fiondella was also an actor, a real playboy and frequent visitor to the Playboy mansion, a trophy-winning hot air balloonist and a deep sea and Arctic treasure-hunter, according to his biographer Jon Stebbins. Some say Marilyn Monroe met JFK for pre-tryst drinks at Chez Jay; it certainly seems like the right kind of place for that, and Fiondella was friends with Peter Lawford, so it makes sense. The last time I walked by Chez Jay I snapped this picture and marvelled that it has lasted so long. Co-owner Michael Anderson will continue to run the restaurant, hopefully for a long time to come.
at 2:36 PM

Chez Jay played a minor role in history as the location at which the Pentagon Papers changed hands.

I've been there once, about 20 years ago. Good, basic food, cold beer.

I lived on the Chez Jay property, in an apartment connected to the back end of Chez Jay's unique saloon, for nearly a decade, the entire 70's. I ate almost every dinner, and drank a dram or two almost every night, with Jay and Mike and the erratic cast of misfits, beachniks, celebrities, surfers, sailors, actors, agents, wannabes, never-gonnabes, and even normal human beings who called the joint home...we loved it. And Jay? We loved him, too. And cussed him. And all called Jay Fiondella our friend.

Obie, the obsessed printer. Then-governor Jerry Brown and his then-squeeze, Linda Ronstadt. Kenny, inventor of The Kenny (Grand Marnier & cognac on the rocks). Tommy Smothers. Shape Shapiro, the beach vollyball shark. The entire cast of "Taxi." Astronaut Allen Shepard, who carried a peanut from a basket on Jay's bar to the moon and back...yeah, there was plenty of action at Chez Jay -- and still is, under the street-smart skippership of Mike Anderson.

With a bow to the loving memory of Alice Fiondella, Jay's late mother, and to the good of hungry and thirsty humanity at large, I'm pretty sure nothing much is gonna change at Chez Jay. And that's a good thing.

Back in 1992 as I was having a "fare-well" dinner at Chez Jay prior to moving to Namibia, Jay mentioned that if I were to come across any WWII German Aircraft to be sure to drop him a note and he would buy it. Well Jay, I never did find that airplane for you, but will keep frequenting your Chez whenever in LA.
Dennis

Because olf its proximity to the previou headquarters of the RAND Corporation, many Randites were regular lunch patrons of Chez Jays and would swap stories of some of his exploits. One of his favorites was finding "Spanish Doubloons)" durig his diving days.
Jay, as was his wont, would almost always stop by the tables to exchange greetings and acknowledge the "class" that the RAND patrons gave to his humble establishment.

Milt Weiner and the RANDites