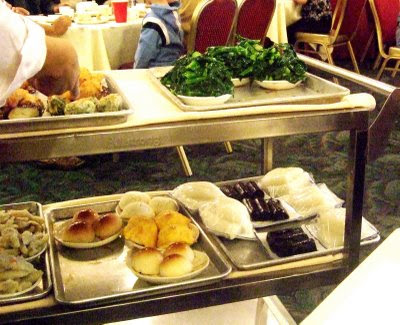 I haven't been to dim sum with carts in quite a long time, but some old friends I hadn't seen for a long time suggested Top Island Seafood in Alhambra, so I was game to try it. It wasn't too crowded yet at 10 am on Saturday, and we were quickly seated in a massive room in a large strip mall.

The carts started coming fast and furious. We were craving the real old-style dim sum -- giant fluffy char siu bao, fried taro, delicate har gow. The steamed char siu bao never did show up, but we tried lots of things that were different from what I'm used to at Sea Harbour and King Hua. The only problem was that we had no idea what they were called or what was in them, but no matter, most tasted pretty good, if not quite up to the level of the more gourmet places. 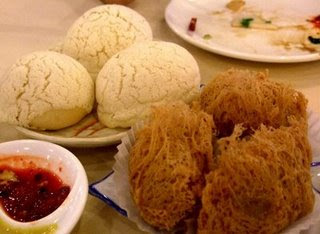 Small wrapped dumplings (above right) married chopped green veggies with perhaps shrimp or pork; hard to tell, but at least we were getting our greens. We motioned toward the beef noodle plate, only to be given a large rice noodle encasing what seemed to be, according to commenter H.C, a deep-fried Chinese doughnut (bottom right) -- that was different! My favorite taro dumplings appeared, in a decent rendition (left). But I had forgotten how hard it is to get yum cha that's still hot off the carts, and most of them suffered by cooling off too much turning a bit greasy in the process. 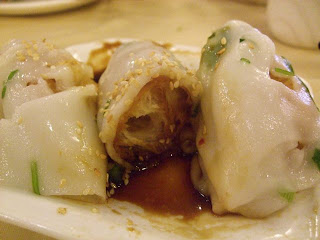 We also tried green pepper stuffed with shrimp, fried shrimp dumplings, fried shrimp balls on sticks with mayo, baked char siu bao, and a dessert-like bao filled with coconut cream that Mo likened to raw cake batter (pictured behind the taro). Prices are low and it was jammed by the time we left, so apparently it's a very popular place. I'm glad I got to try several different kinds of dim sum, but I'd have to say, Top Island is more of a price and variety place than a top quality dim summery.
Top Island
740 E. Valley Blvd.
Alhambra
at 9:21 AM

I think what you had on bottom right is a Zhaliang, basically rice noodle sheets wrapped around a Chinese doughnut.

I have a friend who's a cart yum cha fiend (I guess she likes the spontaneity of it) but I, too, prefer ordering off a menu for hotter, fresher dim sum