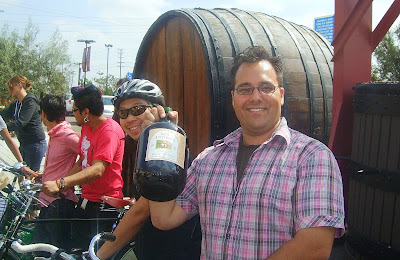 After getting a brand-new bike at Target, I set off yesterday to join the Flying Pigeon folks on one of their Sunday brunch rides. It was mercifully cooler than the last few weeks when they rode to dim sum parlors; this time, it was a trip to the historic San Antonio Winery, built in 1917 near Downtown. We took off from the Flying Pigeon shop on Figueroa, which sells cool Chinese street bikes. I brought my own bike, but some people, like blogger ShaInLA, borrowed one from the shop. The shop's owners Adam and Joseph led us on a nearly car-free route down Marmion, through fascinating pockets of Lincoln Heights, and on to the winery on Lamar St. San Antonio takes up an entire city block, with a wine and gift shop, large restaurant, banquet rooms and rows and rows of barrels aging private label wines as well as the San Simeon and Maddelena labels. T 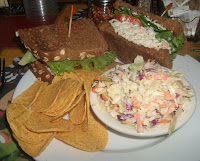 he cyclists were amused to see the way the food was all displayed in front of the cafeteria line wrapped in plastic so that you see exactly what you'll get -- like in Japan, only with real food, not plastic models. There's pasta, sandwiches and a full breakfast menu including chicken fried steak and eggs and huevos rancheros. You pick up your drinks and desserts in a cafeteria line, but the main dishes are cooked to order and brought to your table. You can also get a fruit plate or salami and cheese, if you want something simpler. Wines from the winery and elsewhere and a good selection of beers are available, in case you're thinking Delerium Tremens with chorizo and eggs. I was very happy with the a fresh-tasting tarragon chicken salad sandwich (left) with coleslaw, although one of the other cyclists found it had too much mayonaise for her taste. Well, that's chicken salad for you. The restaurant is reminiscent of an upsale Clifton's, and the decor of giant wine barrels is nea

rly as kitschy. After lunch we had a tour of the winery (antique carved wine barrels, pictured at right), which survived Prohibition by selling sacramental wine to churches. In the tasting room, we tried the winery's San Simeon chardonnay and cabernet before riding back to Highland Park, which is just a touch more uphill than the way there. This was a great trip for a fairly novice cyclist like me, especially with the option to take the Gold Line back!
at 9:52 AM

A lifelong Southern Californian, and I've never been to San Antonio (I never seem to make it out of Grand Central Market when it comes to Downtown food). But it's been on my list for a good long time and now I have a new incentive to go.

I didn't expect haute cuisine, but I have been a bit nervous about what I'd find there. It's good to know the meal was good enough. I'll have to try it out soon, though I'll take the Metro the entire way and leave the bike at home, thankyouverymuch.

great seeing you again yesterday. i had so much fun on the ride yesterday, what a great way to spend a sunday morning.

That's me behind Adam's jug of wine!

Thanks for making it out to our ride!

This coming week we're heading out to Alhambra to get some spicy Szechwan cuisine.

If you have any dim sum tips, they will be much appreciated!

Small bits of content which are explained in details, helps me understand the topic, thank you!