Moles La Tia: A rainbow of tastes in Boyle Heights 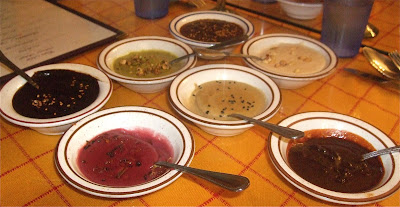 many many moles
The foodies are beating a path to Moles La Tia in Boyle Heights to try their dozens of unusually-flavored moles, and when I saw they had hibiscus and tamarindo moles, I had to try it, since those are some of my favorite flavors. With Josh of Food GPS, Matt of Mattatouille, Tara and John and assorted friends and family, there were enough of us to sample quite a few varieties. We started with samples of half a dozen moles to help us decide, served with handmade tortillas. Apparently the owners of Moles La Tia are the same as the late and lamented Gallo's Grill, and I remember the rustic flavor of the corn tortillas. 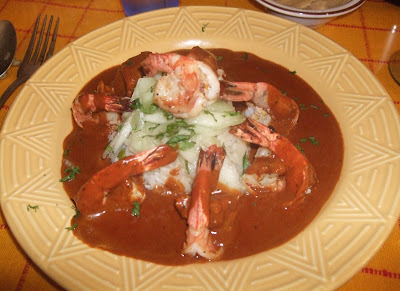 We particularly liked the pistachio, the poblano, and the tamarindo -- only the white mole, which was a little too reminiscent of horchata, seemed like a non-starter. The entrees came with bowls of creamy, herb-inflected chayote soup with croutons, and then they brought over a special Day of the Dead chicken mole sandwich for us to try. My large grilled shrimp swam in a pool of coffee mole sauce which was nicely rounded, with just a hint of cinnamon and not too much sweetness. 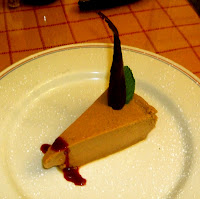 The other diners tried tequila lime mole, pistachio mole with salmon, scallops in coffee mole and a two-toned poblano combo. We sampled three different flans for dessert -- chile chocolate, coffee and coconut. Modest but charming, Moles La Tia is the type of charming spot with imaginative food that Boyle Heights should be very happy to have.
Moles La Tia
4619 East Cesar Chavez Ave.
323-263-7842
at 8:32 PM

I like your photo of the various mole sauces! I just went to Moles la Tia on Sunday with some friends. We all enjoyed it. My sister had the scallops and fruit mole, three friends had the dark and spicy mole on boneless pork, one had the dark and smoky mole on chicken, and I had the tricolor pipian mole on chicken enchiladas. We were served a creamy chicken and vegetable soup as starter, and ordered a quesadilla which I highly recommend. Not the melted jack cheese between two flour tortillas that most are familiar with. No siree. This was a plate holding a large banana leaf in which mushrooms and onions were melted in two kinds of cheese. The handmade corn tortillas are brought piping hot, and you scoop the cheese, mushroom and onion mixture into your tortilla, roll it up and YUMMMMMM! Thanks for posting on this wonderful restaurant.

Ok I know it's a mole place but the coshinita pibil is very good. especially with their awesome tortillas. I have been here a couple of times and it is def a place I will visit again.